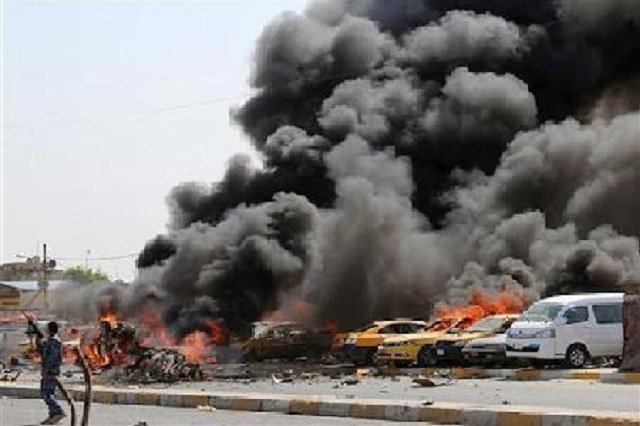 August 9, 2015 11:22 am 0
Obama and Iran: An Angry Nation and an Angry Abandoned President
We Would Like to Meet that Obama Official Genius
Obama Stands Blameless for a New Class of Extremists in Syria

Chicagoan politician Barack Obama has began a dirty campaign to accuse opponents of his Iran deal that they want war instead. For a U.S. President who has supervised three wars in four different countries, this is quite an accusation.

The war president of our time is none other than Barack Obama. Let us look at his record.

During his campaign stops in 2008, Barack Obama promised the American people he would halt the war in Iraq and either redeploy more troops to Afghanistan or bring them home, and finish our wars against al-Qaeda and the Taliban:

“… I will focus this strategy on five goals essential to making America safer: ending the war in Iraq responsibly; finishing the fight against al Qaeda and the Taliban; securing all nuclear weapons and materials from terrorists and rogue states; achieving true energy security; and rebuilding our alliances to meet the challenges of the 21st century.

Today, Obama is engaged in a larger war against al-Qaeda in Syria, Iraq, Pakistan, and Afghanistan. His policies have led to opening three new wars in three additional countries. The war president is Barack Obama.

On March 28, 2011, as Obama was waging his war on Libya, he addressed the nation on television calling for intervention in a new war. He told the American people:

“Confronted by this brutal repression and a looming humanitarian crisis, I ordered warships into the Mediterranean. European allies declared their willingness to commit resources to stop the killing. The Libyan opposition, and the Arab League, appealed to the world to save lives in Libya. At my direction, America led an effort with our allies at the United Nations Security Council to pass an historic Resolution that authorized a No-Fly Zone to stop the regime’s attacks from the air, and further authorized all necessary measures to protect the Libyan people. :

Barack Obama led the war on Libya when bombs began falling against the Qaddafi forces on March 19, 2011. The war president is Barack Obama.

After the Syrian Uprising against Assad that Obama neglected to support, extremist Islamist elements began to flow in Syria to battle the horrors of the Assad regime. Obama also ignored them and refused to arm the moderate Syrian opposition for fear he may offend Ali Khamenei, the terrorist leader ruling Iran.

And although his wars do not include the deployment of U.S. troops, nonetheless, Barack Obama’s actions, or lack of, which sparked these wars have led to more terror acts against the homeland than during George Bush era when America had full armies deployed in Iraq and Afghanistan.

Because of the war president is Barack Obama, ISIS is threatening us here at home. So far we have foiled over 60 ISIS terror acts targeting the homeland.

When our troops are not fighting the bad guys overseas, the bad guys come home to kill American civilians. Obama proved this theory amply with his bad policy in Syria.

Let us not forget the war president is Barack Obama.

The Geneva II Trap
Obama Knows How to Harm Israel Without Looking the Role
Washington, we have a problem in Syria
Slippery Barack Obama 976