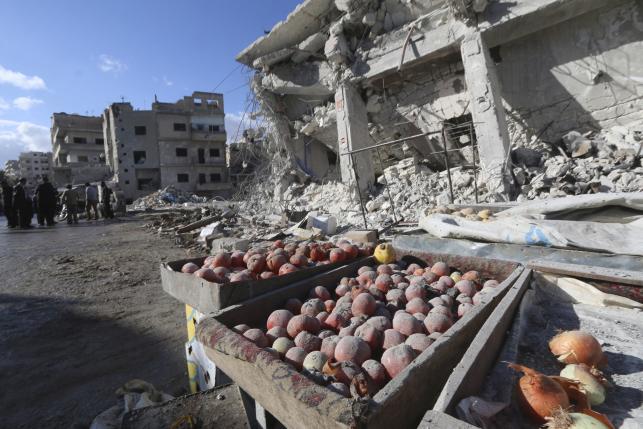 The United Nations Must Condemn Russian Atrocities in Syria

January 9, 2016 9:15 am 0
Syria the Only Country with American and Russian Air Bases
Watch For Your Feet When Dancing With a Russian Bear
The Next Beheading Will Be a Miserable Russian Soldier

Only a third of Russia’s air strikes in Syria are targeting Islamic State and its imprecise attacks are forcing the population to flee, fueling Europe’s refugee crisis, a senior U.S. official said on Saturday. Our U.S. Officials have become a news wire agency announcing their impotence through leaks, not actions. The United Nations must condemn Russian atrocities in Syria.

Of the 5,000 air strikes carried out by Russia since it began its air offensive in Syria on Sept. 30, about 70 percent hit rebels opposed to the psychopath Baschar al-Assad, rather than supporting the efforts of the U.S-led coalition, the official told reporters in Brussels.

Rescue workers and rights groups say Russia’s bombing in Syria has killed scores of civilians at busy market places and in residential areas. Russia denies this the way it denies killing its own journalists and dissidents.

“We are not convinced of what the Russian intentions are,” the official said on condition of anonymity. This is the Nth time Obama’s officials have made similar statements. The spin doctors are out just so Americans say Obama is doing something.

“For a while, very few strikes were going against ISIL and after a lot of public condemnation they turned a number of strikes against ISIL,” the official said, referring to Islamic State, the militant group that controls territory in Syria and Iraq.

The U.S. official said Russia used fewer precision-guided munitions than the United States and its allies.

“The Russian strikes that are not precise cause me great concern because I think there is an indirect correlation to the refugee flow,” the official said. “It is not just the pressure it is putting on NATO and the EU, it is also the humanitarian cost,” the official said.

The United Nations must condemn Russian atrocities in Syria.

Syria’s civil war which began in 2011 has driven 4.4 million Syrians into neighboring states from where many are trying to reach Europe.

The United Nations Must Condemn Russian Atrocities in Syria