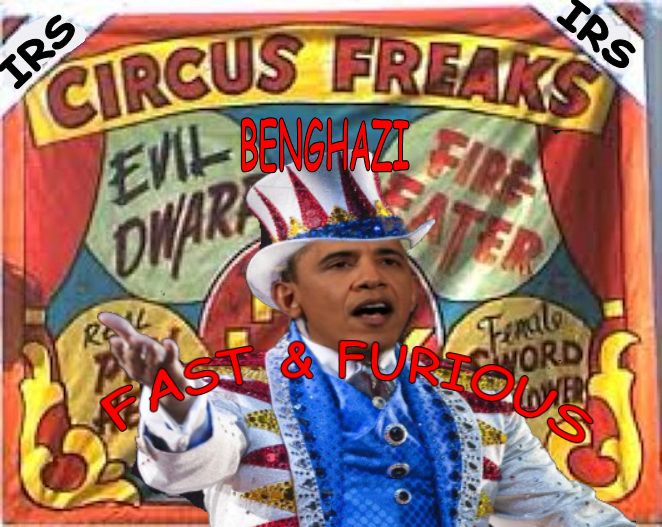 The Talents of Barack Obama

December 14, 2013 12:37 pm 0
Who is the Spy in the Saudi Composed Syrian Opposition?
Assad Stays Terror Increases, Here is the Proof
The Reactive Too Little Too Late Commander in Chief

Get a sense of who president Obama thinks he is after reading what his closest advisor, friend and Rasputin-like confidant Valerie Jarrett, told the media, in 2010, about his godliness and the talents of Barack Obama.

“I think Barack knew that he had God-given talents that were extraordinary. He knows exactly how smart he is. . . . He knows how perceptive he is. He knows what a good reader of people he is. And he knows that he has the ability — the extraordinary, uncanny ability — to take a thousand different perspectives, digest them and make sense out of them, and I think that he has never really been challenged intellectually. . . . So what I sensed in him was not just a restless spirit but somebody with such extraordinary talents that had to be really taxed in order for him to be happy. . . .He’s been bored to death his whole life. He’s just too talented to do what ordinary people do.”

Compare how Jarrett described the talents of Barack Obama as if they were some extraordinary god-like talents. Where is the “Clone Valerie Jarrett” movement?

Besides the IRS scandal, the Benghazi fiasco that resulted in killing the finest American diplomats and security personnel, and more recently the terrific roll out of his signature achievement of Obamacare, and one cannot but ponder the question: Can a man have the talents of Barack Obama be considered a human?

To face the reality of the talents of Barack Obama, here is a snippet from an article published by Security Watch entitled “As moderate Syria rebels slip, US forced to consider aiding Islamist groups” that not only contradicts what Jarrett said of this president, but it shows just how mundane and inconsequential he is.

“The gradual collapse of Syria’s moderate rebel forces is forcing the United States to consider extending its support to the Islamist groups it has long rejected but which are steadily rising to become the Assad regime’s principal opponents. The irony, as some of Syria’s forlorn moderate rebels are noting, is that the US may have unwittingly aided in the demise of moderate forces because it for so long held off extending lethal and nonlethal aid to them – out of fear that some of that aid might fall into the hands of Islamists. Now it’s the Islamists who, without any US assistance, have zoomed past the moderate rebel forces in organization, control of territory, and staying power.”

Wait a minute. Obama did not extend aid to the moderates for fear the weapons might fall in the hands of the Islamists, but now the US is forced to negotiate with the Islamists because its policy indirectly weakened the moderates? Do you feel like me that people who self-promote their talents are what P.T. Barnum had in mind when he said, “There is a sucker born every minute”?

If you think this is funny, consider the quote from the movie “Dumb and Dumber” when Jim Carrey is told:

“Just when I thought you couldn’t be possibly any dumber, you go and do something like this … AND TOTALLY REDEEM YOURSELF”

In my opinion, the Iran Deal is our president’s total self-redemption. It represents the ultimate ghastly talents of Barack Obama.

How utterly unqualified our president is if he is bored out of his wit? Maybe it is his boredom, but it is certainly our lives and the lives of countless hundreds of millions.

Charles Krauthammer nailed the best euphemism about Obama when he wrote “He gives the impression of a man on a West Wing tour trying out the desk in the Oval Office, only to be told that he is president of the United States.”

Move over Haim Saban; if you don’t see a Hollywood mega hit in this euphemism, people like Addelson may just pry their way into your world to make the funniest movie of the century based on Krauthammer’s log line? It is high time for a parody on how bored Barack Obama is, don’t you think? I mean the material is screaming for a producer.

By the way, the fallout from the Iran Deal will be far worse than the fallout from Obama’s Syrian policy. As Obama is approaching the Islamists in Syria with hat in hand, he will soon beg Khamenei to shut down his nuclear program and when he fails, he will offer Khamenei Bahrain as a gift from one god to another.

We earthlings are so boring.

The Talents of Barack Obama