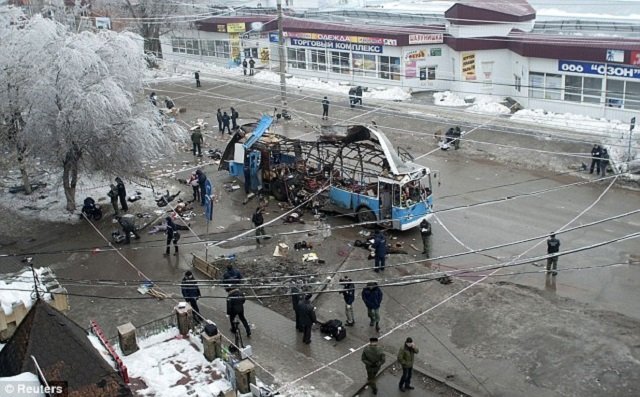 The twin Sharia terror attacks in Volgograd, Russia that took the lives of 31 innocent Russians are both inexcusable and unconscionable. Once again, terror seems to be the easy answer in the regions where Islam is either the dominant religion or where non-Muslim nations turn to violence to protect themselves from the onslaught of Sharia. Between the Russian violence against Chechnya and Chechnya’s violence against Russians, the cycle is endless.

Volgograd is over 600 miles from Sochi, which is not a vast distance if you consider Russia stretches across almost 5,000 miles. These terror acts may just be a prelude to terror in Sochi in the coming weeks, which we must protect Russia against in the strongest ways possible; we all must stand by Russia against any form of terror. There are no excuses for violence against sporting events like The Olympics. The last time it happened in 1972 in Munich, the costs to lives were too great to bear by the Israelis and the international community.

At the heart of this senseless violence is only one cause: Sharia. With Sharia imposing societal laws that contradict those other religions adhere to, Islam will always be the cause of all ills. Live and let live is not Islam’s way and as long as we Muslims maintain this single-minded obsession to leading the infidels into our virgin-laden heavens, violence will prevail across the globe. Sharia is the reason why Muslims and non-Muslims resort to violence in certain parts of the world with non-Muslims defending against Sharia and Muslims attempting to impose it. It is that simple.

Islam is the religion of choice for almost all poor and backward countries. Spreading the Koran in those countries was made easy because of the inhuman conditions we all know poverty disseminates and along with it the lack of education and the prevailing of ignorance. Muslims assuming rich countries, with much knowledge and education, will yield to Sharia, the way poor countries did over the centuries, is causing violent confrontations in different parts of the world. Those developed countries will annihilate Islam before they yield to Sharia and 1.6 Billion Muslims can do zip about it. Those clashes will continue until Islam reforms.

Many Syrians would argue that acts of Sharia terror against Russia are justified because they are in response to the terror of Assad against Sunni Muslims aided by the Russian Government. If we Syrians act like Assad, Putin, or Khamenei do, we would become the savages they are. We must hold to our principles to defeat their Sharia terror by only defending ourselves, not by killing the innocents in Russia or any other country.

Eradicating terror should be our top priority, and the ideologies of one country or another must not stand in the way of this important goal. As much as we disagree with the policies of Putin, we have no choice but to stand by Russia and the Russian people when they face Islamic Sharia terror.