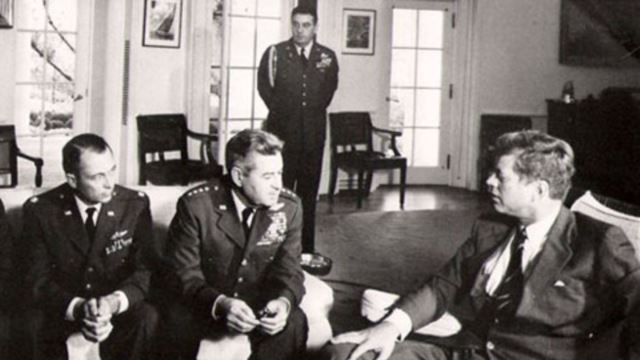 May 14, 2015 8:58 am 0
Did Assad Threaten to Gas Other Countries?
Will Assad Use Sarin Gas After the IRGC Swap?
Hey Pussy Obama, Assad Just Established His Red Line Against You

U.S. Presidents usually define their legacies by their actions. Barack Obama may be the only exception.

When Ronald Reagan fired the defying, and illegally striking, air traffic controllers, he sent a message that reverberated in the halls of the Kremlin. When George Bush waged war on Saddam Hussein in Iraq, he sent a message that every despot in the Middle East heard, and when John F. Kennedy stood his ground in the 13-day standoff with Khrushchev during the Cuban missile crisis in 1962, Kennedy signaled US intolerance towards Soviet expansionism.

Along the way, each President defined his legacy by their actions.

President Barack Obama may be the only modern U.S. President who defined his contribution to stability by what he did not do when he drew his red line legacy against the Assad regime, and then as quickly backed down. Instead he opted for a Russian proposal of extracting all the chemical weapons in Syria, which was supposedly completed in June of 2014.

The red line legacy of Barack Obama is coming back to haunt him again.

Now comes the news that Assad has not delivered all his chemical weapons stockpiles; in addition to the fact Assad has been gassing his own people continually for over a year now.

Not only did Putin and Assad fool Obama and made him look like an incompetent U.S. President, but they have also defined Obama’s legacy like Khrushchev could never define Kennedy’s. Whomever tried to compare Obama to Kennedy must be smoking something. Real historians will not be making that mistake. This is the red line legacy of Barack Obama.

Furthermore, Obama continues to ignore Assad’s use of chemical weapons against his own people as a reminder of his impotency.

The New York Times published an article on this subject in which it pointed to Obama’s new strategy in the face of his failure:

“But Mr. Obama appears no more eager to use military force against Mr. Assad’s government today than he was in 2013 when he abruptly called off a threatened airstrike in exchange for a Russian-brokered agreement in which Syria voluntarily gave up its chemical weapons. Instead, the Obama administration responded to reports of violations this time by seeking renewed assistance from Russia and exploring a new United Nations Security Council resolution addressing Syria’s continued use of chemicals as weapons.”

Just imagine for a moment John F. Kennedy failing to remove Soviet nuclear missiles from Cuba, and then turn around and ask the Soviets to help him remove them. This is what Barack Obama is doing. This President is hopeless. He will never understand or learn from his own mistakes or those that history taught us. He will fall again on his head, and innocent Syrian civilians will continue to die needlessly at the hands of a psychotic Assad. This is the red line legacy of Barack Obama.

This is the red line legacy of Barack Obama

Did Assad Threaten to Gas Other Countries?
Obama Symbolizes The Kid in the Toy Store Syndrome
The Syrian Curse
Slippery Barack Obama 976