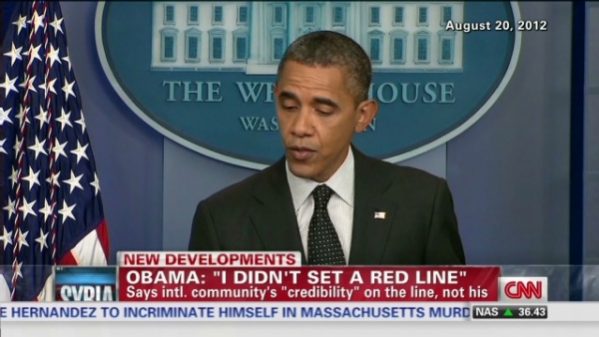 The President Who Believes Everyone is Wrong But Him

February 21, 2013 11:52 am 0
Be brave, the Khameneists are coming
Putin Becoming Global Threat to Security and Peace
How Washington Turned Iran into a Powerhouse

The number of opinions in the mainstream media calling for Obama to act on Syria is telling of how little this President considers the opinions of others over his own. When you’re set in stone, seeking advice shows how much leadership is lacking. The President who believes everyone is wrong but him.

These calls for a different policy on Syria than the present one destroying Syria have not been made by neo-conservatives or Tea Party aficionados, but rather by a cadre of centrist or left-leaning media outlets.

Below is one of those compelling arguments made by The Economist for intervention in Syria. We still believe that even of the President reads it on his way to a Golf round, he will toss it aside. He knows best after all. This is about a President who believes everyone is wrong but him.

The death of a country

As Syria disintegrates, it threatens the entire Middle East. The outside world needs to act before it is too late

AFTER the first world war Syria was hacked from the carcass of the Ottoman empire. After the second, it won its independence. After the fighting that is raging today it could cease to function as a state.

As the world looks on (or away), the country jammed between Turkey, Lebanon, Jordan, Iraq and Israel is disintegrating. Perhaps the regime of Bashar Assad, Syria’s , will collapse in chaos; for some time it could well fight on from a fortified enclave, the biggest militia in a land of militias. Either way, Syria looks increasingly likely to fall prey to feuding warlords, Islamists and gangs’a new Somalia rotting in the heart of the Levant.

If that happens, millions of lives will be ruined. A fragmented Syria would also feed global jihad and stoke the Middle East’s violent rivalries. Mr Assad’s chemical weapons, still secure for now, would always be at risk of falling into dangerous hands. This catastrophe would make itself felt across the Middle East and beyond. And yet the outside world, including America, is doing almost nothing to help.

The road from Damascus

Part of the reason for the West’s hesitancy is that, from the start of the uprising in 2011, Mr Assad has embraced a strategy of violence.

By attacking the Arab spring with tanks and gunships, he turned peaceful demonstrators into armed militias. By shelling cities he uprooted his people. By getting his Alawite brethren to massacre the Sunni majority, he has drawn in jihadists and convinced Syrians from other sects to stick with him for fear that his own fall will lead to terrible vengeance.

Syrian blood now flows freely and sectarian hatred is smouldering (see article). The fight could last years. Rebel groups have lately been capturing military bases. They control chunks of the north and east and are fighting in the big cities. But the rebels are rivals as well as allies: they are beginning to target each other, as well as the government’s troops.

Even if Mr Assad cannot control his country, he has every reason to fight on. He still enjoys the cultlike devotion of some of his Alawite sect and the grudging support of other Syrians who fear what might come next. He commands 50,000 or so loyal, well-armed troops’and tens of thousands more, albeit less trained and less loyal. He is backed by Russia, Iran and Iraq, which between them supply money, weapons, advice and manpower. Hizbullah, Lebanon’s toughest militia, is sending in its fighters, too. Mr Assad almost certainly cannot win this war; but, barring an unexpected stroke of fate, he is still a long way from losing it.

So far the fighting has claimed 70,000 or more lives; tens of thousands are missing. The regime has locked up 150,000-200,000 people. More than 2m are homeless inside Syria, struggling to find food and shelter. Almost 1m more are living in squalor over the border.

Suffering on such a scale is unconscionable. That was the lesson from the genocides and civil wars that scarred the last half of the past century. Yet President Barack Obama has suggested that saving lives alone is not a sufficient ground for military action. Having learnt in Afghanistan and Iraq how hard it is to impose peace, America is fearful of being sucked into the chaos that Mr Assad has created. Mr Obama was elected to win economic battles at home. He believes that a weary America should stay clear of yet another foreign disaster.

That conclusion, however understandable, is mistaken. As the world’s superpower, America is likely to be sucked into Syria eventually. Even if the president can resist humanitarian arguments, he will find it hard to ignore his country’s interests.

If the fight drags on, Syria will degenerate into a patchwork of warring fiefs. Almost everything America wants to achieve in the Middle East will become harder. Containing terrorism, ensuring the supply of energy and preventing the spread of weapons of mass destruction: unlike, say, the 15-year civil war in Lebanon, Syria’s disintegration threatens them all.

About a fifth of the rebels — and some of the best organised — are jihadists. They pose a threat to moderate Syrians, including Sunnis, and they could use lawless territory as a base for international terror. If they menace Israel across the Golan Heights, Israel will protect itself fiercely, which is sure to inflame Arab opinion. A divided Syria could tear Lebanon apart, because the Assads will stir up their supporters there. Jordan, poor and fragile, will be destabilized by refugees and Islamists. Oil-rich, Shia-majority Iraq can barely hold itself together; as Iraqi Sunnis are drawn into the fray, divisions there will only deepen. Coping with the fallout from Syria, including Mr Assad’s arsenal of chemical weapons, could complicate the aim of preventing Iran from obtaining a nuclear bomb. Mr Obama wanted to avoid Syria, but Syria will come and get him.

Syria is more dangerous today than it was in October, when this newspaper called for a no-fly zone in order to ground Mr Assad’s air force. Mr Obama’s policy of waiting for the conflagration in Syria to burn itself out is failing. Rather than see things deteriorate still further, he should act.

His aim should be to preserve what is left of Syria. That means trying to convince the people around Mr Assad that their choice is between ruinous defeat and turfing out the Assad family as a prelude to talks with the rebels. A no-fly zone is still needed to ground Mr Assad’s air force and destroy some of his missiles. It would be a big, bold signal of America’s resolve to Mr Assad’s supporters. America should recognise a transitional government, selected from Syria’s opposition. It should arm non-jihadist rebel groups — including with limited numbers of anti-aircraft missiles. France and Britain would back this, even if other Europeans would not. Russia supports Mr Assad in part to frustrate Mr Obama. Europe and America should keep on trying to tempt it to give him up, by promising it a stake in a liberated Syria.

There are no guarantees that this policy will work. But it will at least build links with the non-jihadist rebels whom America will need as allies in the chaos if Mr Assad stays. Today those moderate Syrians feel utterly abandoned.

The President Who Believes Everyone is Wrong But Him