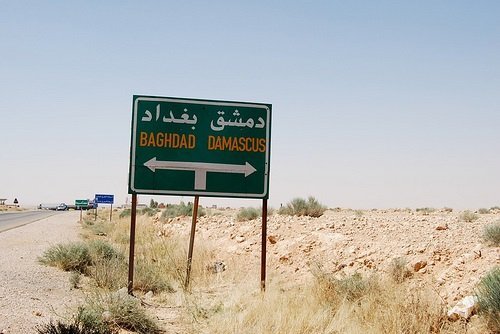 The (Longest) Road to Damascus

March 28, 2013 10:06 pm 0
Martial Law in the United States? Where is Canada?
Is Russia Playing Good Cop in Syria, America Bad Cop?
Assad of Syria is behind the Orlando Massacre

Source: The Wall Street Journal (The (Longest) Road to Damascus)

Obama begins to see the cost of doing nothing in Syria.

So now—24 months, 70,000 deaths and 500,000-plus refugees later—President Obama is contemplating a Syria policy that amounts to something other than determined inaction. The Administration’s initial argument was that U.S. involvement would intensify the violence within Syria, strengthen the hand of extremists, extend Bashar Assad’s political lease on life, and turn a civil war into a regional crisis.

That being exactly what has come to pass, Mr. Obama wants a course correction. A small one. In nautical terms, we’re talking a half-point to starboard.

Specifically, the President is said to favor slightly beefing up the not-so-covert CIA assistance to secular Syrian rebels, which so far has amounted to some military training, to include actionable intelligence sharing. He also wants the State Department to coordinate overall regional assistance to the rebels, and to help with governance in Syrian areas under rebel control.

But Mr. Obama remains firmly opposed to providing arms to the rebels, much less involving U.S. military forces directly. His greatest fear, according to someone whose job it is to publicize authorized leaks from the government, is that too much involvement will require Mr. Obama to “own” the Syria problem in a way that will come to define the remainder of his Presidency.

We hate to break it to the Administration’s Boswells, but Mr. Obama has owned the Syria debacle from Day One of the uprising, and even before it. The President came to office determined to improve relations with the Syrian dictator. That effort was unofficially led by then-Senator John Kerry, who once praised Mr. Assad as a man who had been “very generous with me.” It took five months for the Administration to call for Mr. Assad to go, though it has since done nothing to make that happen.

At the time, the war had resulted in 112,000 refugees and an estimated 17,000 fatalities, a fraction of the current figures. Mr. Assad had not yet begun firing ballistic missiles against Syrian cities. Iraq was only beginning to slide into its current de facto pro-Assad/pro-Iran posture. The al Qaeda-linked al Nusra Front was only six months old and hadn’t gained its current strength or popular cachet as a Syrian rebel force. Israel hadn’t yet been drawn in with air strikes against weapons moving from Syria to Hezbollah in Lebanon.

All these trends will worsen, perhaps dramatically, without a serious U.S. effort to overthrow the Assad regime. Yet the Administration continues to point to the risks of any involvement, such as the fear that U.S. arms might fall into the hands of bad guys. That’s a real risk, but the weapons are flowing anyway. The difference is that today we have little sway over where any weapons go.

The U.S. could boost its diplomatic leverage with the rebels and their regional allies by enforcing no-fly zones over portions of Syria. That would help prevent the regime from using its attack jets and helicopter gunships against civilian targets while allowing insurgents to consolidate and extend their territorial gains. It also means we could use limited force in a way that strengthens the hand of rebels we support at the expense of those we don’t.

The U.S. could also follow last week’s call by Senators John McCain and Carl Levin for targeted air strikes against Mr. Assad’s air force and Scud missile batteries. We should add that such a use of force would require Mr. Obama to persuade Congress and the American public that it is in the national interest, something he has rarely tried to do even when 100,000 U.S. troops were in Afghanistan.

Nobody is arguing for American boots on the ground, but the sooner Mr. Assad falls the easier it will be to prevent the various nightmare scenarios that are becoming more likely. Among those scenarios: the disintegration of the Syrian state into warring ethnic enclaves; revenge killings amounting to genocide against Mr. Assad’s Allawite sect; the spillover of war into Lebanon, Jordan or Iraq; the further empowerment of al Nusra and similar jihadists; the seizure by parties unknown of Syria’s chemical weapons stocks; or the breakout of a pan-regional Shiite-Sunni conflict.

Mr. Obama may imagine that his only foreign policy problems are those he chooses to touch. If he were Prime Minister of New Zealand, that might be true. But that’s not how the world works. Sooner or later the world’s biggest problems always land on an American President’s desk. The catastrophe in Syria is unfolding on his watch, and history will judge him not merely on how he acts, but on how he has refused to act.

The (Longest) Road to Damascus