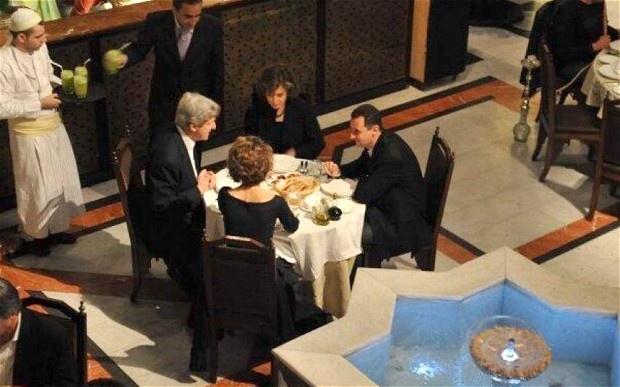 There are many hidden faces supporting Assad. But none is more lethal than Senator John Kerry whose delusional spectrum of ideas always fall in the laps of one dictator or another. Regardless of their tendencies to gas and kill innocent women and children.

Here at TFS, we have adopted a nickname for Senator Kerry. We call him the Assad useful idiot. To him, this is NOT an insult. Rather, it is a badge of honor he is willing to wear with pride and joy.

President Obama is one of those people who sees America as the evil doer (That’s why he apologizes so often to foreign leaders and that’s why Putin, Chavez, and Castro have endorsed him so enthusiastically). This renders him disposed to side with America’s enemies first to assess and correct.

The only foreign organization Obama has fought against from day one was al-Qaeda. Only because he could not afford to take a soft stand against an organization the American public knows stands behind the terror of 9/11. Such would have compromised his image.

Foreign Relations Chairman Senator John Kerry has always been an Assad advocate; even today as Assad kills and terrorizes his own innocent people.

Note in this NPR radio interview how he dodges the question of whether the US should arm the FSA for defensive purposes. He states that the Russians and the Chinese must also be a party to this decision. Really Senator?

Worse even is how he sheds doubt about the FSA and the Syrian opposition. The FSA represents the moderates army officers and conscripts who defected from the Assad army.

If Senator Kerry, who is Chairman of the Foreign Relations Committee and one who has access to precise intelligence reports, does not have answers to these questions, then this country is really in trouble. The problem is he has the answers; but because he supports Assad, Kerry speaks as if he was Assad’s PR manager and publicist.

Tickle Me Elmo
AP and Reuters Are Ignoring Explosive News
If we do not defeat Assad, ISIL may defeat us
Opinions 1006 Syrian Revolution 1352 Tehran John 72