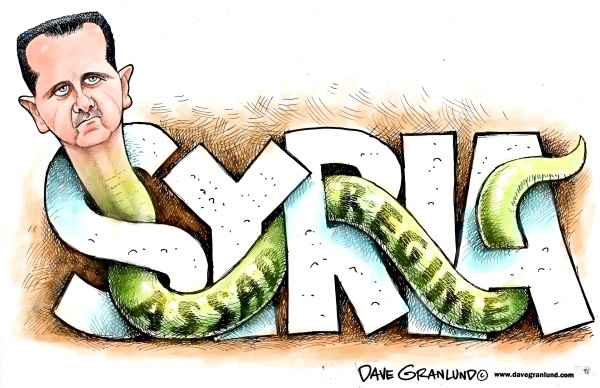 This trial is important because it will transcribe the history of the Assad family terror. Besides being resistant to the usual Assad denials, its impact may come back to haunt Assad himself down the road. In terms of evidence, it is as important as the 55,000 images “Caesar” smuggled to showcase the torture and death most Syrian civilians are subjected to in Assad dungeons.

Thank you Germany for putting the Assad regime on trial for the world to see the constant terror most Syrians live under with a psychotic maniac ruling the country.

THE HEAD OF THE SNAKE IS ASSAD

The Assad regime has relied on the support of both the Russian and the Chinese Government (RC axis) at the U.N. to escape culpability. Both countries have thrown their weight around to protect him from submitting to international accountability.

The rise of Islamic extremism and terror in Syria has given both nations the incentive to disregard Assad excesses against his own people. So what if Assad exercises his own brand of terror against ordinary citizens, we still need him to terrorize Muslims, argues the RC axis. Even if he fostered ISIS to forestall any western effort at removing him from power.

To the leadership in China, which has locked up millions of its own Muslim population in concentration camps, and Russia, which fought in Chechnya against Muslim separatists, Assad is a necessity. Not his personae, per say, but his psychotic temper to kill efficiently. By using any means possible to include gassing the opposition. The day Assad defeats the Muslim extremists in Syria, he becomes an exchangeable commodity.

So guess what. Muslim extremists fighting a soft, low-level war are Assad’s insurance policy. Syria will always boast ISIS and ISIS-like extremists because they serve the continuity of Assad. It’s just realpolitik as far as the U.N. veto-wielding RC axis is concerned.

Take, for example China 2025 plan, which threatens industries the US leads the world with. Like aeronautics and space. China’s goal is take over these industries to cause an American economic power decline. Our trade war with China is the facade. The real war is in stopping China from implementing its 2025 plan. China is also taking defensive measures against the US. Was the coronavirus, then, a weapon that backfired badly?

Russia has set its eyes on Europe. Again. Vladimir Putin’s war with America centers on his extended sphere of influence and Syria is just a stopover, like a rest area on a highway, to catch the bigger fish.

If the United States can manage to strike a detente with Russia, Russia would trade Assad in a blink of an eye as long as his replacement protects the Orthodox minority in Syria like el-Sisi protects the Copts in Egypt, and is capable of confronting Islamic extremism with an iron fist.

At the end of the day, Assad is just a small pawn in a multi-dimensional chessboard. He is a nobody. A servant serving a greater purpose. This means his time will come.

Hollande: Russia’s Intervention Will Not Save Assad
An EU Show of Solidarity, a Clash, and a Veto
Topple Assad to Quiet the Middle East
Assad Terror 247 Dumb Assad 96 Opinions 1017