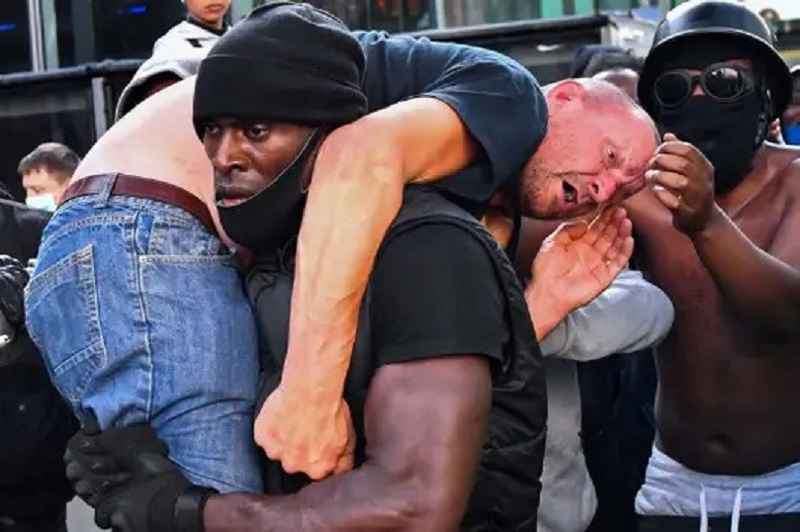 The Fake News Stories Trump Could Learn From

June 15, 2020 12:05 pm 0
Turkey Will No Longer Stop Syrian Refugees From Reaching Europe
Is Irrational Trump a Danger to National Security?
US Congress Bill Punishes Assad for His Atrocities

CNN published a story about a black man named Patrick Hutchison in London saving the life of a white man after he was attacked by angry mobs. The likelihood that the white man was part of a far-right groups protesting Black Lives Matter. Yet, Mr. Hutchison (seen in the image above) carried the white supremacist raging with racism to safety. These are the fake news stories Trump could learn from.

When interviewed by CNN, Patrick Hutchison said many things to justify his humanity. But the most important words, he said last:

Wow. Can we pause for a moment to reflect upon this man’s wisdom? Forget his courage and benevolent heart. Let’s just concentrate on his sapience and clear-sightedness. He is just a protester. A normal man that probably lives next door to any Londoner.

Do you think, if Donald Trump read his words in the fake world he lives in, he would have gone “Darn it, I was really a fool“.

America has been cursed with a U.S. President whose brain is missing all the wisdom cells. All of them. His incapacity to form a cohesive sentence in support of unity will haunt us for a long time because it will take generations to dial back on the monsters he let out of the box. But then again, maybe it’s a good thing. Maybe Trump, unknowingly, is killing off the ideology of white supremacy. At least the mixed-races protesters on the streets are as clear an indicator to this theory. Maybe Trump symbolism is taking its last breath. We hope so.

GIVE HUTCHISON A MEDAL

We don’t know about the British protocols to honor outstanding citizens, but we believe Queen Elizabeth should honor Mr. Hutchison. The optics, given the racism that also exists in England, would go a long way to appease the masses. Queen Elizabeth, in her wisdom, is a master at social and political timing, and fate just handed her country a gift to help England transition into a more tolerant society. Think of it as equivalent to the Edwardian Period transition in race relations.

The world is changing under our feet because each generation, as it rises, sets the acceptable parameters for a better life. They each express what they want their societies to exemplify. The Millennial and the Z generations have spoken. On a global level, they want their environments to exude health. Not only they vie for a better environment, but also for co-existence and tolerance. If we cannot co-exist without killing each other, how do we expect the world to change for the better?

Give that man a medal for his wisdom and courage. Call it the British Medal of Wisdom for Outstanding Citizenry.

Or, the Trump Medal of Wisdom.

The Fake News Stories Trump Could Learn From