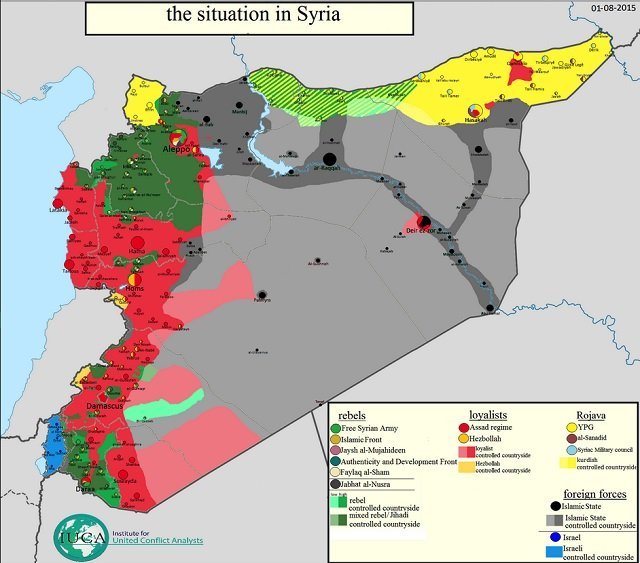 Baschar al-Assad of Syria is a dead horse standing on one leg. The man everyone finds it hard to abandon is begging to be abandoned if you follow the trail of his defeats and the results of his war against his own people.

The dead horse Khamenei and Putin continue to bet on is flat on his back in the middle of the track leaving behind a legacy of terror and violence the Middle East has never witnessed in its modern history.

An organization named Institute for United Conflict Analysis estimated recently that Assad controls about 25% of Syria. This is down from 100% three years ago. But this is not the worst news. The 25% control also happens to shield about 40%-50% of Syria’s population making the next phase of Syria’s civil war probably deadlier that its last phase so far.

To ask why Iran and Russia are still betting on Assad is to understand their role in keeping dead horse Assad in the race. When the regime freed from its jails thousands of Islamists who played the key role in re-procreating ISIS in Syria, both countries may have been on-board with this scheme. What better way to highlight the importance of a secular Assad than to show his ugly Islamist alternative?

What both countries miscalculated was the anger Arabs and Sunnis were experiencing because of Assad extreme violence against the innocent Sunni women and children. The Syrian civil war is the most photographed and videotaped war in human history because it happened just when every one had a cell phone and every cell phone had a camera. Khamenei and Putin did not realize the impact of social media on the psyche of Sunnis across the globe.

The atrocities dead horse Assad committed helped ISIS recruit fighters from 80 different countries from around the world. Since the Organization of Islamic Cooperation OIC boasts membership in 57 countries with a Muslim population, ISIS was successful recruiting from non-Muslim nations to defeat Assad, which raised red flags in the West. No one in Russia or Iran expected ISIS to grow and become the danger it has become. After all, dead horse Assad has in the past forged other Islamist organziations like Fatah al-Islam to serve his purposes that went no where.

ISIS has changed the landscape. On one hand, Obama ignored the moderate Free Syrian Army because he was more interested in harming Israel than helping Syrians, and on the other hand, Iran and Russia now felt compelled to stand even more by their dead horse because they need Assad to control the Frankenstein he created.

The problem is that neither Assad, nor his schemes, or his bravado can deter the Islamists fighting in Syria today. Every attack they carry against any Assad-held positions is hit simultaneously and almost weekly by suicide bombers. No one has the capacity to defend against suicide attackers. The fact ISIS could produce so many young Muslims willing to die for a cause is reason enough for Khamenei and Putin to realize that their dead horse will not save their interests in Syria.

There is a flurry of activities today by Russia to find an exit to their dilemma in Syria. The problem is that Putin is still insisting on either Assad or one of his cronies (Ali Mamluk) to lead Syria. While Russia procrastinates, the Islamists have been able to fire several rockets at Latakia yesterday. Time is not on Putin or Assad’s side either.

If Khamenei or Putin really want to defeat the terrorists in Syria, start by abandoning the dead horse Assad while developing a strategy to defeat ISIS. Without Assad, ISIS would defeat itself and run out of reasons to spread its own genre of terror across northern Syria.