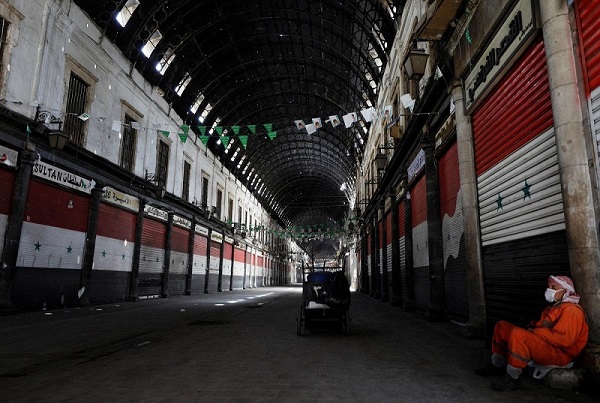 The Coronavirus May Have Saved More Syrian Lives

March 30, 2020 6:15 am 0
Will Trump let Assad get away with using chemical weapons in Syria?
Will Alawite Mothers Save Syria?
Food to be Delivered to Madaya is a Scam

Syria’s revolution against its demonic and brutal dictator Baschar al-Assad and ensuing civil war, now in its 11th year, has been the source of much more than an internal conflict. But where every country failed the coronavirus succeeded in curbing the violence and the wholesale destruction of a nation. In fact, the coronavirus may have saved more Syrian lives already.

Syria’s Assad has been the source of so many tragedies that it covers every brutal action the world witnessed during WWI and WWII.

SYRIA’S WAR IS A GLOBAL WAR

Since 2011, there have been several global attempts at curbing Assad violence against Syrians, especially women and children. All have failed. Partially because Assad is a psychotic killer, and partially because Putin vetoed every attempt by the United Nations to limit that violence. Putin even vetoed the UN investigating Assad’s use of chemical weapons.

The notion that Assad is fighting Islamist terrorists when his own government fostered ISIL does not sell. Rarely do terrorists fight each other.

Many countries have been involved in Syria’s war. The United States and Europe to curb Assad terror and to stem the flow of refugees to the EU. Russia and Iran to help Assad win the war no matter the consequences of their violent and barbaric behavior. Even while Assad was letting ISIS off the hook and trading with the terrorist organization. Saudi Arabia to assist a Sunni-majority country, and Turkey and Qatar to see the Muslim Brotherhood order rise to power.

In-between, the United Nations refugee assistance programs, fund raising efforts, security council meetings, and calls for cessation of hostilities have gone mostly unnoticed or unheeded. No other war, in recent memory, has involved so many countries and affected so many people in such a short period of time.

THE CORONAVIRUS SUCCEEDS WHEN THE UN FAILED

But where every other effort by superpowers and regional players have failed, it seems the coronavirus has succeeded.

Hostilities, for the time being, have abated. Iran has been hit hard by the virus and it is believed Iranian troops in Syria have become mostly incapacitated. So have Assad forces as proximity transmits the virus easily when you are more concerned about living than touching your face.

The coronavirus has hit hard all the countries actively engaged in the Syrian theater. Iran suffers from over 23,000 cases and still growing rapidly. Turkey’s infections have exceeded 9,200 cases and the worst is yet to come. Russia remains at the bottom of the hockey stick but the number of infections will soon go vertical. Every country has an interest in curbing their involvement in Syria’s war while battling the virus.

Thus, indirectly, all countries involved have diminished the violence each is perpetrating in pursuit of their interests.

What will happen after defeating the spread of COVID-19? The likeliest of scenarios is that the Assad war on Syrians will continue.

Despite this short-lived optimism, the coronavirus in Syria may have saved more lives than taken them. Why? Because it stopped the Russian air force from bombing civilians, and Assad from dropping barrel bombs on women and children.

The Coronavirus May Have Saved More Syrian Lives