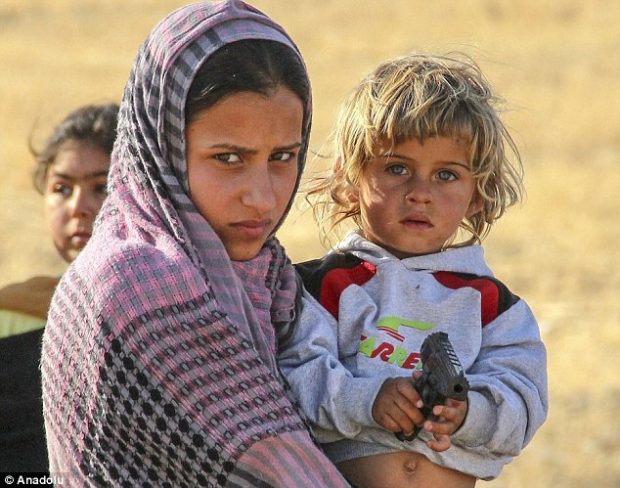 The Beating Hearts of Syrian Mothers

December 26, 2012 10:50 pm 0
Mr. President, should you not do more to protect the civilians?
Gulf states plan military response as Putin raises the stakes in Syria
Putin’s Adventurism in Syria Taxes his Economy

Many who watch the videos streaming from Syria see a third-world impoverished country, destitute-looking people we cannot find commonalities with no matter how much our hearts are pained and no matter how much our conscious agonizes. The truth is that the beating hearts of Syrian mothers are the best weapons against Assad.

What does a suburbanite Virginia housewife, or an Iowa farmer, or a California college professor have in common with the Syrian people? Almost nothing. Our suffering pains many, but the memory of the pain lasts seconds. This is not a universal picture of course, but it is a true picture if we set aside the formalities of political correctness and look hard at Syria from the common denominator angle that usually leads to more than empathy.

Most Syrians fighting and getting killed are poor farmers; they have been forced to feed from the bottom of the barrel by a regime of terror intent on demolishing any human attributes of success from a people it considers its enemy. Most Syrians are not finely educated in the art of life be it in recognizing what is permissible; or in behaving in accordance with any norm we are familiar with here in America, which, in the eyes of law abiding citizens, makes them an oddity. However, the honest truth is that Syrians are like any other mammal we meet and until we get to know them intimately, we cannot feel the warmth of the same mammal heart that beats in their body. Consider how much death and oppression they shouldered silently for 42 years of the Assad rule to fully grasp their nature.

Americans are the most generous and the kindest people on the planet when you get to really know them the way I, as a Syrian-American, have over the last 34 years of living in the US. This universality is demonstrated aptly and consistently by the number of NGO’s helping the world, by the billions of Dollars Americans donate every year knowing the good deeds their money will serve, and by the colorful and innovative ways a neighbor always finds it in his/her heart to help their fellow neighbor during times of crisis. If you want amazing, I tell my fellow Syrians, come to America and you will understand the courage and the boldness of the American people.

But Americans are confused and distracted today. They are confused by wars and distracted by the domestic failure of their political leadership. Their attention span is dwindling even if they occasionally see some of the horrific videos of Syrians dying needlessly. It’s not because America does not want to pay attention, it is because America has too much on its plate today. To most Americans, essentially, Syria is like butter on a dinner table in a medical conference on the dangers of cholesterol; almost no one is going to reach for it.

Syrians today are swimming upstream. Like salmon, they are getting caught in the paws of the Russian bear and consumed rapidly and viciously. The outside world see us this way and see the bear catching us for a meal or two and think of the oddity of nature. It stops at that.

I believe that the beating heart of mothers is what connects humanity; theirs is the silent symphony that grooms our children; from the pain they feel to be the great men and women with deeds greater than life itself.

The beating hearts of Syrian mothers, too, play in that symphony and their pain will one day groom great Syrian men and women to achieve great deeds. That’s our only hope in the midst of violence, terror, destruction, and loss of life.

The Beating Hearts of Syrian Mothers