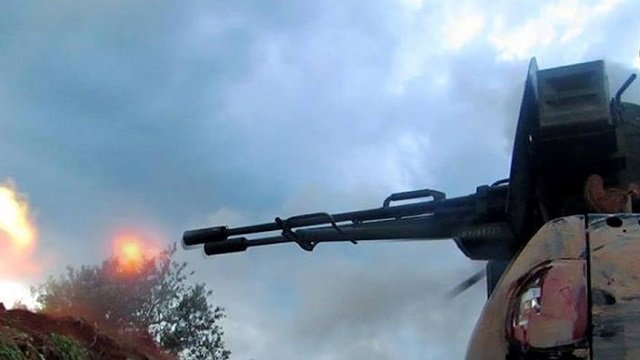 The Battle To Surround Latakia Rages On

According to activists operating on the ground, overnight some 90 Assad loyalists, to include mercenaries and foreign fighters, have either died or were injured defending Sahl al-Ghab, a region that extends directly into the Sahel region giving the rebels a straight shot into Latakia, Assad’s Alawite stronghold.

The violent clashes involve several rebel groups such as Jabhat al-Nusra, Ahrar al-Sham, and a garden variety of other Islamist factions and fighters.

The battle to surround Latakia is taking place on the edge of the Idlib and Hama provinces around the village of al-Qarqour as well as around the town of al-Ziyara and Tal Waset located in the northwestern countryside of Hama.

The Assad regime has delivered its punch against the rebels in the form of some 160 airstrikes carried out over the last 24 hours, but has failed to dislodge or stop the advancement of the rebels in the region.

According to the same activists, the bombardments by the regime and the fierce fighting to surround Latakia resulted in the death of 22 fighters of Syrian origins in addition to 15 fighters of Arab, Chechen, or Turkestan origins. The ratio of 90 to 35 indicates grave losses for the regime in Sahl al-Ghab.

Some of those who died on the rebels side were carrying out suicide missions against the Assad forces in al- Kfeir area in Jisr al- Shugur. They blew themselves up in the midst of Assad loyalists.

Because Sahl al-Ghab provides the rebels the opportunity to drive the battle to surround Latakia, the Assad regime cannot afford to lose this important region sitting on the edge of his center of power.

In his latest interview, Assad admitted great losses in his military ranks but he also indicated his forces will be defending vital regime areas going forward.

Sahl al-Ghab is one of those regions and so far, it seems the regime is unable to defend it. The rebels fighters have become a formidable force in Syria’s civil war.

The Battle To Surround Latakia Rages On