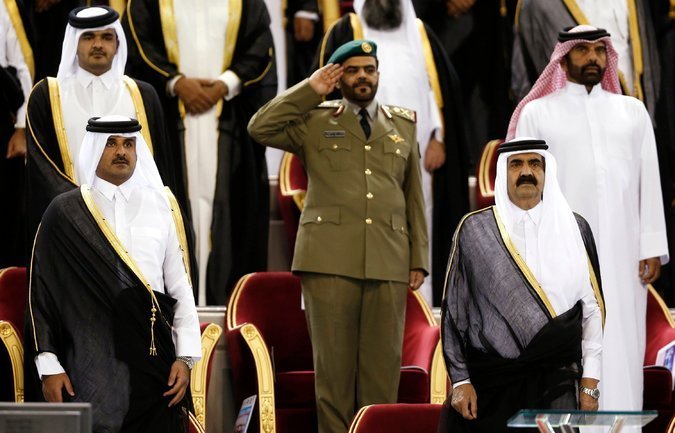 July 1, 2013 8:20 am 0
Just Civil War in Syria? Think Again
Who Will Protect the Minorities of Syria?
15 Children from Daraa Saved the GCC Countries

As an intermittent supply of arms to the Syrian opposition gathered momentum last year, the Obama administration repeatedly implored its Arab allies to keep one type of powerful weapon out of the rebels’ hands: heat-seeking shoulder-fired missiles.

The missiles, American officials warned, could one day be used by terrorist groups, some of them affiliated with Al Qaeda, to shoot down civilian aircraft.

But one country ignored this admonition: Qatar, the tiny, oil- and gas-rich emirate that has made itself the indispensable nation to rebel forces battling calcified Arab governments and that has been shipping arms to the Syrian rebels fighting the government of  [psychopath] Bashar al-Assad since 2011.

Since the beginning of the year, according to four American and Middle Eastern officials with knowledge of intelligence reports on the weapons, Qatar has used a shadowy arms network to move at least two shipments of shoulder-fired missiles, one of them a batch of Chinese-made FN-6s, to Syrian rebels who have used them against Mr. Assad’s air force. Deployment of the missiles comes at a time when American officials expect that President Obama’s decision to begin a limited effort to arm the Syrian rebels might be interpreted by Qatar, along with other Arab countries supporting the rebels, as a green light to drastically expand arms shipments.

Qatar’s aggressive effort to bolster the embattled Syrian opposition is the latest brash move by a country that has been using its wealth to elbow its way to the forefront of Middle Eastern statecraft, confounding both its allies in the region and in the West. The strategy is expected to continue even though Qatar’s longtime leader, Sheik Hamad bin Khalifa al-Thani, stepped down last week, allowing his 33-year-old son to succeed him.

“They punch immensely above their weight,” one senior Western diplomat said of the Qataris. “They keep everyone off balance by not being in anyone’s pocket.”

“Their influence comes partly from being unpredictable,” the diplomat added.

Mr. Obama, during a private meeting in Washington in April, warned Sheik Hamad about the dangers of arming Islamic radicals in Syria, though American officials for the most part have been wary of applying too much pressure on the Qatari government. “Syria is their backyard, and they have their own interests they are pursing,” said one administration official.

Qatari officials did not respond to requests for comment.

The United States has little leverage over Qatar on the Syria issue because it needs the Qataris’ help on other fronts. Qatar is poised to host peace talks between American and Afghan officials and the Taliban, who have set up a political office in Doha, the Qatari capital. The United States Central Command’s forward base in Qatar gives the American military a command post in the heart of a strategically vital but volatile region.

Qatar’s covert efforts to back the Syrian rebels began at the same time that it was increasing its support for opposition fighters in Libya trying to overthrow the government of Col. Muammar el-Qaddafi. Its ability to be an active player in a global gray market for arms was enhanced by the C-17 military transport planes it bought from Boeing in 2008, when it became the first nation in the Middle East to have the durable, long-range aircraft.

The Obama administration quietly blessed the shipments to Libya of machine guns, automatic rifles, mortars and ammunition, but American officials later grew concerned as evidence grew that Qatar was giving the weapons to Islamic militants there.

American and Arab officials have expressed worry about something similar happening in Syria, where Islamists in the north have turned into the most capable section of the opposition, in part because of the weapons from Qatar. Saudi Arabia recently has tried to wrest control from Qatar and take a greater role in managing the weapons shipments to Syrian rebels, but officials and outside experts said the Qatari shipments continue. The greatest worry is over the shoulder-fired missiles — called man-portable air-defense systems — that Qatar has sent to Syria since the beginning of the year. Videos posted online show rebels in Syria with the weapons, including the Chinese FN-6 models provided by Qatar, and occasionally using them in battle.

The first videos surfaced in February and showed rebels wielding the Chinese missiles, which had not been seen in the conflict previously and were not known to be in Syrian government possession. .

Western officials and rebels alike say these missiles were provided by Qatar, which bought them from an unknown seller and brought them to Turkey. The shipment was at least the second antiaircraft transfer under the Qataris’ hand, they said. A previous shipment of Eastern bloc missiles had come from former Qaddafi stockpiles.

The shipments were small, the Western officials and rebels said, amounting to no more than a few dozen missiles. And rebels said the Chinese shipments have been plagued with technical problems, and sometimes fail to fire. The first FN-6s were seen in the custody of groups under the Free Syrian Army banner, suggesting that they were being distributed, at least initially, to fighters backed by the United States and not directly to extremists or groups with ties to Al Qaeda.

American and Arab officials said that Qatar’s strategy was a mixture of ideology — the ruling family’s belief in a prominent role for Islam in political life — and more hard-nosed calculations.

“They like to back winners,” one Middle Eastern official said.

In meetings with Mr. Obama, the leaders of Jordan and the United Arab Emirates have expressed a host of grievances about the Qatari shipments and have complained that Qatar is pursuing a reckless strategy.

In Mr. Obama’s meeting with Sheik Hamad at the White House on April 23, American officials said, he had warned that the weapons were making their way to radical groups like Jabhet al-Nusra, also known as the Nusra Front, a Qaeda-affiliated group that the United States has designated as a terrorist organization.

“It was very important for the Qataris to understand that Nusra is not only an organization that destabilizes the situation in Syria,” said one senior Obama administration official. “It’s a national security interest of ours that they not have weapons.”

But Charles Lister, an analyst with the IHS Jane’s Terrorism and Insurgency Center in London who follows the Syria opposition groups, said that there was evidence in recent weeks that Qatar had increased its backing of hard-line Islamic militant groups active in northern Syria.

Mr. Lister said there was no hard evidence that Qatar was arming the Nusra Front, but he said that because of existing militant dynamics, the transfer of Qatari-provided arms to certain targeted groups would result in the same practical effect.

“It’s inevitable that any weapons supplied by a regional state like Qatar,” he said via e-mail, “will be used at least in joint operations with Jabhet al-Nusra — if not shared with the group.”

At least some extremists have already acquired heat-seeking missiles and have posted videos of them, although the sources for these arms are not apparent from videos alone. And they appear to have been made principally in the Eastern Bloc, not in China.

Don’t Panic, Assad Will Fall After Testing
Is the Arab League Trading Syria for its Security?
The Kurdish Cause vs. The Palestinian Cause
Syria News 1147 Syrian Revolution 1349