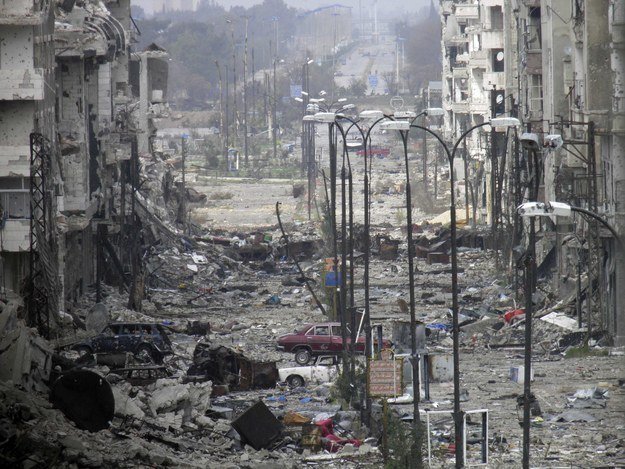 Syrian government troops unleashed a major artillery barrage on the city of Homs on Friday, hitting buildings near a 13th century mosque as they pressed an assault on rebel-held areas in the country’s strategic heartland. Homs pounded by Army and Hezbollah militants.

Opposition activists said Lebanese Hezbollah guerrillas had joined the fighting in Syria’s third largest city. If confirmed, it would be the first major involvement for the Iranian-backed group since it helped regime troops capture a key border town from the rebels last month.

As the shells landed, thousands of civilians trapped in the city faced severe shortages of food, water and medicine, prompting the U.N. and opposition groups to warn of a humanitarian catastrophe.

The rebels fighting to topple the psychopath Baschar al-Assad have suffered a series of setbacks recently, including the loss of the strategic town of Qusair near the Lebanese border last month. Despite recent shipments of more advanced weapons from Gulf Arab countries, they have been unable to score any major gains in the past few weeks.

The powerful Hezbollah, a staunch ally of the regime, was instrumental in the regime’s victory in Qusair. Opposition activists say the group’s fighters have spread out in Homs and even parts of Aleppo in the north, propping up outstretched army troops.

Emboldened, the regime has tried to build on its successes to further shore up its military position. On Saturday, it launched a major offensive on Homs, a central city of about 1 million located on the road between the capital Damascus and regime strongholds on the Mediterranean coast.

The fighting in Syria has increasingly taken on sectarian undertones as Assad enjoys support from many in his Alawite sect, an offshoot of Shiite Islam, while the rebels are mainly Sunnis.

Activists, who consider Homs “the capital of the revolution,” say the regime wants to capture the entire city to include it in a future Alawite state stretching to the coast, where many believe Assad would take refuge in a last resort.

“It appears the regime wants to take Khaldiyeh (district), no matter what the price,” said Tariq Badrakhan, an activist based in the northern district of Homs where the fighting was concentrated Friday. He said troops backed by pro-government militiamen and Hezbollah fighters were attacking the area from three sides with multiple rocket launchers, tanks and mortars.

Online video showed shells slamming into buildings in the densely built-up area near the historic Khalid Ibn al-Walid mosque, famous for its nine domes and two minarets that tower over the skyline. The video, posted on Saturday, appeared consistent with AP’s reporting from the area.

Activists on the ground that track the civil war in Syria said a woman and her three children were killed in the shelling on Khaldiyeh Friday evening. The eldest child was aged five.

The activists also said Hezbollah guerrillas were fighting in Homs, although Hezbollah has not commented and the reports could not be independently verified.

The militant group only acknowledged its participation in the Qusair battles after dozens of its fighters were returned home dead. There has been no sign of that in the past few days.

Homs has been an opposition stronghold since the early days of the uprising against Assad. Mass Arab Spring-inspired protests there starting in early 2011 prompted repeated army offensives on the city. Hundreds of people were killed and thousands driven from their homes.

The government now controls much of the city, though several neighborhoods in the center including Khaldiyeh and Bab Houd are still opposition strongholds.

Badrakhan said government forces were facing stiff resistance from the rebels and have not advanced far in six days of fighting.

But Mohammed Saleh, a Homs-based Alawite activist, said regime forces would be able to capture all-rebel-held areas in Homs within days as rebels are surrounded and running low on ammunition.

He said the regime was trying to strengthen its hand ahead of any peace talks by capturing as much territory as possible.

“The capture of Homs means that an international political solution is closer,” Saleh said, referring to attempts by the United States and Russia to bring rival factions in Syria to a peace conference.

Rupert Colville, spokesperson for the U.N. High Commissioner for Human Rights Navi Pillay, said he is “extremely concerned about the human rights and humanitarian impact” of the government offensive.

“Shortages of food, water, medicine, electricity and fuel in besieged areas are severely affecting civilians, including women and children,” he said in a statement issued in Geneva.

Recent reports suggest that armed opposition groups are operating inside residential areas, increasing the risk for civilians, the statement said, adding that the number of civilians trapped in the heavy fighting in and around Homs is believed to be between 2,500 and 4,000.

In Turkey, Syria’s main opposition bloc appealed to the United Nations and Western countries that have supported the opposition in Syria’s civil war “to intervene immediately” and provide food and medicine to the besieged, rebel-held areas of Homs.

“The areas under attack in Homs have been cut off from the rest of the world and suffer from an urgent shortage of medicine and food,” the Syrian National Coalition said in a statement.

More than 93,000 people have been killed in the conflict that began as peaceful protests but turned into an armed revolt after opposition supporters took up arms to fight a brutal government crackdown.