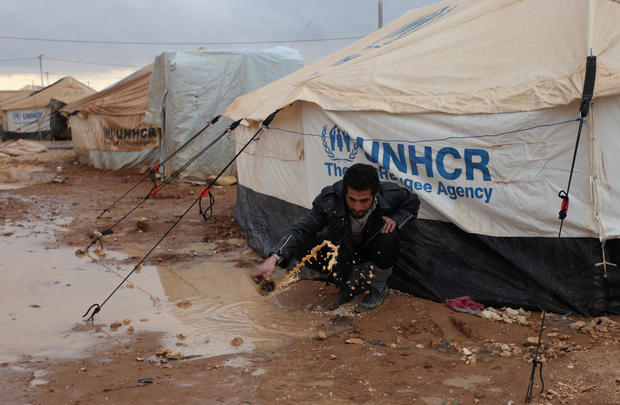 As Turkish troops finalize plans to attack northeast Syria, Ankara’s scheme to move millions of refugees into conquered territory there is alarming some Western allies as much as the military operation itself. A senior U.S. State Department official described the Turkish plan as “probably the craziest idea I’ve ever heard”.  Washington thinks Syrian refugees returning home is a crazy idea.

These are Syrian refugees, not native Indians returning to their lands.

Resettling Syrian refugees will demolish eight years of Kurdish planning to cleanse the region of all Syrian Arabs. This is quite worrisome to all the western planners playing a role in re-drawing the region’s map. They most fear the rise of an Islamist mini-state shaped by the Muslim Brotherhood of Turkey. Syrians, however, see their people returning home.

Addressing world leaders at the United Nations two weeks ago, President Tayyip Erdogan held up a map of the region setting out ambitious proposals to build dozens of new villages and towns to settle Syrian refugees.

His map showed that 1 million Syrians would be housed in the northeast, but Erdogan told the U.N. General Assembly that even more – up to 2 million – refugees could settle there once Turkish soldiers take control.

For Turkey, which hosts more refugees than any other country in the world, returning some Syrians across the border has become an urgent priority as it battles economic recession and high unemployment.

But most of the 3.6 million Syrians in Turkey are from Sunni Arab areas in western Syria, not the mainly Kurdish northeast. Moving huge numbers of refugees into an area hundreds of miles from their homes would involve a drastic demographic shift.

Reports in July surfaced when Turkey forced, from Istanbul, the deportation of some refugees, which raised concerns about any large-scale returns. Turkey says it has not sent any Syrians back against their will, which is true. Most Syrians wish to return home under conditions requiring their safety and a future free from oppression and terror. All guaranteed by Turkey’s planned return of Syrian taking refuge on their soil.

Czech Foreign Minister Tomas Petricek, voicing widely held European concerns, said Syrian refugees should be able to return voluntarily. “I don’t think, however, that they should be returned by any military operation, Turkish or otherwise,” he said. The minister never rendered an opinion about Iranian forced military operations that sent Syrian refugees into foreign lands.

Ankara has dismissed the concerns about the impact of a return of refugees from Turkey. Erdogan’s government said any change to the population would only be redressing moves by the Kurdish forces which currently control the region.

Turkey … has no interest in occupation or changing demographics. The PKK/YPG did that in northeast Syria. Time to correct it.

For Ankara, which views Kurdish YPG fighters in northeast Syria as terrorists because of their ties to militants waging an insurgency inside Turkey, an influx of non-Kurdish Syrians would help it secure a buffer against its main security threat.

Other areas of Syria have seen drastic population changes. The Assad regime has cleansed two rebellious Sunni neighborhoods in Homs and Damascus.

Before heading to the United Nations last month, Erdogan told Reuters that the Turkish-controlled zone:

… will both allow the refugees we have to return to their lands, and allow for all their needs, from education, health, shelter to be met. It will allow them to live on their own lands (instead of) the tent towns and container cities.