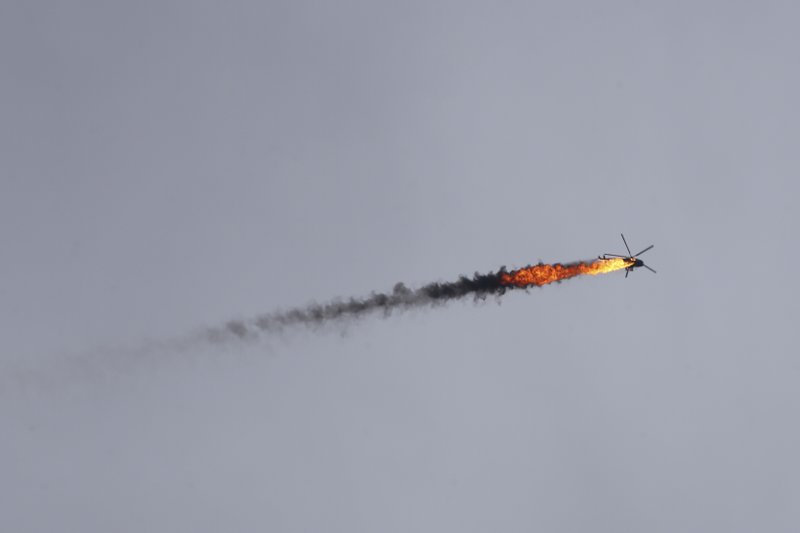 On Tuesday, the Syrian opposition shot down a barrel bombing helicopter the Syrian military used to kill civilians in northern Syria. It killed its crew members in a fiery crash. Meanwhile, the Assad regime kept up its relentless bombing campaign on the opposition-held region. The latest was an airstrike in which seven civilians died.

The violence in Idlib province came as government troops moved closer to capturing the last rebel-controlled section of a strategic highway linking southern and northern Syria, which would bring the road under the full control of the Assad’s forces for the first time since 2012.

With support from Russia and Iran, Syrian troops have been on the offensive for weeks in Idlib; as well as parts of nearby Aleppo provinces. The three armies unleashed a humanitarian crisis with 700,000 people fleeing their homes and surging north toward the Turkish border.

Nearly a quarter of the 3 million people in Idlib and nearby areas have fled. Terrified families piled onto trucks and other vehicles, clogging muddy rural roads in yet another harrowing exodus in the conflict, now in its ninth year. Hundreds of civilians have died in the latest fighting, according to the United Nations.

The Syrian opposition shot down the helicopter gunship amid fighting near the village of Nairab. The Turkish-backed rebels tried to retake it after losing it last week.

Associated Press video showed the helicopter spiraling from the sky and breaking up as fire poured from its fuselage, just before it crashed. Two bodies could be seen on the ground.

Hours later, a Syrian airstrike hit the city of Idlib, the provincial capital. The strike killed 12 civilians, half of them children, and wounded about thirty.

The fighting recently escalated with two separate clashes between Syrian and Turkish troops. The confrontations killed dozens of Syrian forces as well as five Turkish soldiers who were killed Monday.

Turkey, a main backer of the rebels, has rolled armored vehicles into Idlib. The intent is to prevent government forces from reaching the border areas with Turkey. The country is home to some 3.6 million Syrian refugees and is concerned about more streaming in.

Turkey’s defense minister told The Associated Press that Ankara has as many as four observation posts and two military positions in Syrian government-controlled territory. Ankara warned Assad that Turkish soldiers were under orders to retaliate forcefully to any attacks.

Defense Minister Hulusi Akar said in the interview that Turkey would not vacate any of its 12 observation posts in Idlib.

In the event of any action against them, they have been given instructions to retaliate even more powerfully.

The Syrian army said the Turkish threats “will not dissuade the (Syrian) army from continuing its operations in Idlib and western Aleppo province.”

It warned that the military is ready to respond to the “aggression of Turkish occupiers.”

The majority of Syrians consider the Assad family as an occupying threat forcing its terror upon a helpless population.

At a speech in Ankara, he said he would explain Turkey’s next steps in Idlib province at a ruling party meeting Wednesday.

During a trip to Montenegro, Turkish Foreign Minister Mevlut Cavusoglu urged Russia and Iran to halt “the regime’s aggression.”

He said the offensive in Idlib was threatening Turkey’s relations with Russia.

He told a news conference:

There have been very important results from our cooperation, but unfortunately the regime’s attacks in Idlib, killing civilians and attacking our troops, have begun to do a great deal of damage to this partnership.

Cavusoglu added that Erdogan and Russian President Vladimir Putin would talk by telephone.

Talks between Russian and Turkish officials about the escalation in Idlib ended Monday. Erdogan’s office told the Russian delegation that attacks on Turkish posts in Idlib must stop immediately. He promised to retaliate to further attacks.