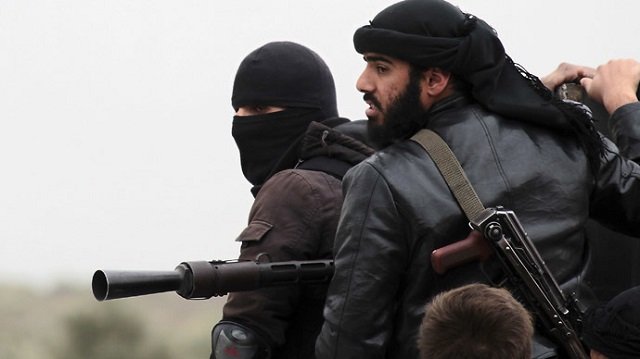 October 1, 2013 6:29 am 0
Syria’s humanitarian blackmail is a war crime, and its victims need our help
To be or not to bee
Soldiers’ Mass Execution Reported by Syria Group

From his desert compound near the green banks of the Euphrates river, Ahmed Abu Risha has been nervously watching as the jihadists he helped oust from Iraq with the help of the US army once again grow in strength all around him.

In towns and villages on the flat lands south towards Baghdad and in the communities that dot the sprawling desert west towards the border with Syria, militant groups are imposing their influence with brutal efficiency.

Random, savage and relentless violence is once more a reality in this part of Iraq, with almost daily bombings and killings stirring ghosts of a time, not long ago, when Anbar province was almost lost to al-Qaida and when hopes for a civil and stable country seemed futile.

But with Anbar again immersed in anarchy, Abu Risha’s eyes are fixed far away from the reborn troubles at home, on battlefields far from his purview – across the border in Syria. There, as in Iraq, jihadists are wreaking havoc, attempting to assert themselves in a revolution that aimed to reorient a nation state, but is now increasingly dragging the region into chaos.

Abu Risha, and the tribal leaders of Anbar who helped drive the anti-al-Qaida movement in 2007 known as the awakening (in Arabic, al-Sahawa) are deeply troubled by what they are seeing.

“If somehow a democratic state is not eventually established in Syria, there will be a problem for all the region,” said Abu Risha. “It cannot be an Islamic state.”

Yet an Islamic state is unambiguously what the jihadist groups now fighting alongside the opposition in Syria are aiming for. “They want strict Islamic law and they want Syria to be a stage for a jihad elsewhere,” said Abu Risha. “This has to be stopped.”

Across northern and eastern Syria, where the jihadist groups are strongest, talk of an Iraq-style awakening has been prevalent since the start of the year. While the resurgent violence in Iraq is nothing to aspire to, the four years of relative quiet there from the end of 2007, and the temporary crippling of al-Qaida’s ability to wreak havoc at will, at least offer some form of respite from a situation in Syria that is fast slipping from their control.

The al-Qaida-aligned groups that started mustering in Syria from July 2012 onwards have been consolidating in large swaths of the north and east and spreading out, just as they have been in Anbar and the farmlands north of Baghdad. With their creeping presence has come the enforcement of new ways in the rural north; summary justice, fear and intimidation. There is a sense of lurking danger.

“We welcomed them at the beginning,” said Majid Abu Lail, a shopkeeper from al-Bab, north-east of Aleppo. “Even though we don’t share their values. They told us they had saved Anbar from the Americans and that they weren’t here to fight us. But theyÂ areÂ here to fight us, to try and dominate our ways of life with theirs. And now we must fight them.”

Black flags now fly above many mosques and civic buildings in towns across Syria’s north and in Iraq’s border towns. Local residents near Aleppo walk silently past school walls with white horses painted on a black background – an image widely used by al-Qaida in the north. “We don’t want their paintings, or their jihad,” said Abu Saed, a member of the Free Syrian Army in Aleppo. “They can take the stallion back to the dark past that they came from.”

Talk of how to get an awakening under way is now well advanced here, just as it is in the corridors of power in Riyadh, and even Baghdad, where Iraq’s prime minister, Nour al-Maliki, is convinced that the jihadist push in Syria is bleeding directly into the rising terror menace he is facing at home.

Abu Risha, who in 2007 became the Iraqi face of al-Sahawa, which ousted al-Qaida for a while and helped the US military partly restore security in Iraq, said little could be done in Syria without the backing of a powerful nation state.

“An awakening would only succeed if it was not done by militias, or tribes,” he said. “It has to be done by a state.”

While the tribes of Anbar were the first to turn on al-Qaida, they had limited means to turn their resentment into action, or to sustain a fight against a powerful foe that had made inroads across the society. Sensing a moment to turn around an increasingly hopeless situation, the then commanding general of US forces in Iraq, David Petraeus, in early 2007 partnered first with the Anbar tribes, then Iraq’s security forces in a year-long campaign that cost much blood and treasure but ultimately freed the province from the grip of jihadists. Until now.

Abu Risha acknowledges that there is little chance that the US army would make such a commitment to Syria and he fears that US allies in the region have a similar lack of appetite for a direct intervention.

“If the Americans in all good conscience cannot help [the Syrian opposition] now after all the deaths of the children, the chemical attacks, then what can be done for them. How will this end? People can’t just use the name of the awakening. It is more than just a slogan.

“The Gulf countries are the ones who should help destroy Jabhat al-Nusra and al-Qaida. They have to be regarded as terror groups and not supported in any way.”

Saudi Arabia and the Emirate states, which support the Syrian opposition, have looked on with alarm as the jihadist influence has risen in the north and the likelihood of any western power taking them on continues to fade. “There is a serious risk that the opposition can no longer achieve its main objective up there,” said an influential backer of the Syrian opposition.

On the ground, much of the opposition fears that such a moment is now upon it. Last week, 13 armed opposition groups formed a new alliance that ostensibly breaks away from the western-backed opposition structure, which it claims is disconnected from realities on the battlefields and whose backers who have little willingness to bring the war to an end.

The new structure omitted the most powerful al-Qaida-aligned group in Syria, the Islamic State of Iraq and Sham (Isis), which is directly linked to the main al-Qaida group in Iraq and whose leader, Abu Bakr al-Baghdadi, helps direct the insurgency in both countries.

Isis itself was a breakaway from the first al-Qaida group in Syria, Jabhat al-Nusra, which was subsumed by the Iraqi-led body in a power struggle in May and has remained resentful ever since. Ever since, its influence has faded in the north, while elsewhere in the country it has remained strong.

The move followed several weeks of intense clashes in the north between Isis and brigades aligned with the Free Syrian Army, which saw the jihadists overrun the border town of Azaz, and al-Bab, in the first of what it said would be other similar moves.

“We could see that remaining with the military council [the western-backed body] would get us nowhere,” said a leader of Liwa al-Tawheed, the largest opposition unit in the north and a key signatory to the new alliance.

“The Americans want to trade Syria away as part of a regional solution with Iran. Iran is not part of a solution, they are central to the problem.”

Other members of the nascent body say that while they support the newfound distance from the military council, the main reason for the split is to isolate Isis. “There is a broad understanding that they have to be stopped,” said a leader of Ahrar al-Sham, a salafist group with some al-Qaida links. “This is still a Syrian revolution. We will not let it become a toy for them.”

A third opposition leader, from the Suqour al-Sham unit, said the new grouping, while ostensibly Islamic, was the first foundation stone of an awakening that many in the north had tried to delay, for fear of losing the war, but now felt was inevitable.

“The regime doesn’t bomb their bases,” he said. “All those flags and trucks outside and they hit hospitals and schools next door. Bashar may be happy with what we have done, but we will get to him soon.”