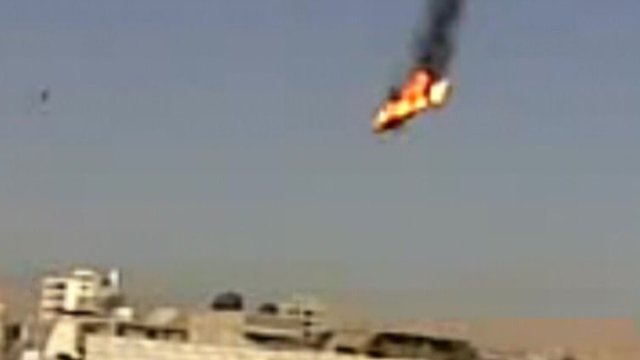 May 16, 2015 12:19 pm 0
Is Putin Using ISIS to Terrorize Europeans in Turkey?
Assad Finger on the Panic Button
Syria: Executions, Hostage Taking by Rebels

NATO member Turkey, an outspoken critic of Syrian President Bashar al-Assad, has a 900-km (560-mile) border with Syria and frequently scrambles jets to its frontier worried about territorial violations.

Turkish Prime Minister Ahmet Davutoglu said military jets fired upon a Syrian helicopter after first mistaking it for another type of aircraft due to fog.

“There are rules of engagement,” Davutoglu was quoted as saying by NTV news channel’s website.

“Our jets responded and later that helicopter crashed within Syria’s borders … The authority we have given the Turkish Armed Forces is extremely clear. Whoever violates Turkish borders, be it by land or by air, will be punished.”

Defense Minister Ismet Yilmaz said jets shot at the helicopter shortly after 2 p.m. (7 a.m. EDT). It crossed over into Turkish airspace for seven miles, over a period of five minutes, before it was fired upon, he said, according to the Anadolu News Agency’s website.

But Syrian state TV denied Turkey had taken out its aircraft and said it was a surveillance drone that was shot down.

A Turkish military official said two F-16 fighters flying out of Incirlik base in southern Turkey had opened fire on a target.

Eyewitnesses in Turkey’s Hatay province, which borders Syria, reported seeing an aircraft fired upon by jets and break apart in the air. News channels said it landed in Syria.

The Turkish military has stepped up security in province at the border following the incident, security sources said.

Turkey has taken in more than 1.7 million Syrian refugees and has repeatedly called for Assad’s overthrow for his handling of the uprising against him and subsequent conflict.

Turkey denies that allegation and any suggestion it has delivered arms to Islamist militants fighting to overthrow Assad.

Syrian Helicopter Shot Down by Turkey