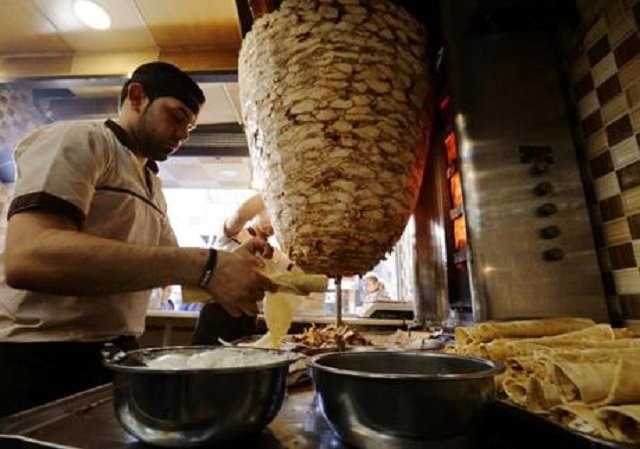 December 11, 2015 5:17 am 0
Surprising Transformation of the Syrian People
Texas Fails to Block Syrian Refugees
Think of This Syrian Beauty When You Think Syrian Refugees

The Syrian economy could collapse any day. Over four years into a grinding civil war, the Syrian government is scraping the barrel to boost its revenues with everything from taxes on shawarma sandwiches to telephone lines.

The country’s economy has been ravaged by the conflict that began in March 2011, which has claimed the lives of over 300,000 people and pushed over four million to become refugees, and another six millions displaced internally.

Perhaps the most tangible evidence is the weakness of the Syrian pound, currently trading at 390 to the U.S. dollar, compared to around 60 before the war and 240 just a year ago.

Most money changers in Damascus expect things to get worse still, anticipating a further slide to 500 pounds to the dollar next year.

When the uprising against the psychopath Basahar al-Assad’s regime began, the governor of the central bank announced the country had reserves of some $18 billion.

But experts say much of that has been used up.

“The regime has less and less foreign currency, revenues have dried up, the war effort is becoming more taxing and its two main donors,Russia and Iran, have their own financial problems,”

Since March 2011, Iran has extended Syria some $5.5 billion in credit lines, but Russia in November last year decided against a one-billion-dollar loan. We suspect the reason to be because Assad has spirited away to European banks some $62 Billion his family stole over 45 years of ruling Syria.

Revenues have slowed to a trickle, particularly as the government has come under sanctions that prevent exports and lost control of much of the country’s oil and gas resources.

The oil minister has acknowledged some $58 billion in direct and indirect losses to the oil and gas sector since the war began.

With the capture by the Islamic State jihadist group of most of Syria’s eastern oil fields, the government now produces just 9,688 barrels a day, down from 380,000 before the war.

The 2016 budget projects a 31 percent deficit, similar to that of 2015, prompting the government to rein in spending and impose new taxes.

It has instructed all public administrations to reduce their energy consumption by 30 percent and to eliminate thousands of temporary government employee contracts.

The state telecommunications company, which has a monopoly on landlines, has also doubled monthly subscription fees for its 4.5 million subscribers.

That in theory ought to bring in some 10.8 billion Syrian pounds ($308 million), but The Syria Report noted that the company’s subscriber base has plummeted because up to 40 percent of its network has been damaged.

Even the humble shawarma sandwich, a popular Middle Eastern dish of grilled, spiced meat cut into thin slices, has not escaped the government’s drive for revenues.

“Last week I had to pay 220 Syrian pounds for my shawarma sandwich instead of 200, and the restaurant owner told me it was because there’s a new 10 percent ‘reconstruction tax’ that’s being imposed on each sandwich,” 50-year-old Damascus resident Tahseen told AFP.

Property rents also face new taxes of between 500-1,000 Syrian lira a month, and the tourism ministry has began taxing restaurants based on the number of diners they can accommodate.

The measures come after previous steps, including easing subsidies for bread, which increased in price three times in 2014, along with rising costs for water and electricity.

And the government has also sought to squeeze revenue out of issuing and renewing passports, raising fees while lifting some restrictions to bring in around $520 million since the start of the year, according to the interior ministry.

And it has stemmed the outflow of foreign currency, limiting import licenses and giving priority to those seeking raw materials for the production of dairy products, canned foods, medicines, detergents and textiles inside Syria.

But despite the regime’s efforts, Yazigi said “the future is bleak” for Syria’s economy and the government’s finances.

“The state will be forced to slash its spending even further, and since it won’t be able to touch military spending, it will cut public services and not repair what is damaged, and people will become poorer and poorer. They will be forced increasingly to dip into their savings and many will look to emigrate.”

At TFS, we believe Syria’s economy is unsustainable if you add other economic factors such as ethnic cleansing (Lost revenues) and the steady stream of refugees leaving Syria. The Syrian economy could collapse any day.

Maybe, it is time for the psychopath Assad to dip into his own $62 billion pockets to shore himself and his regime up.