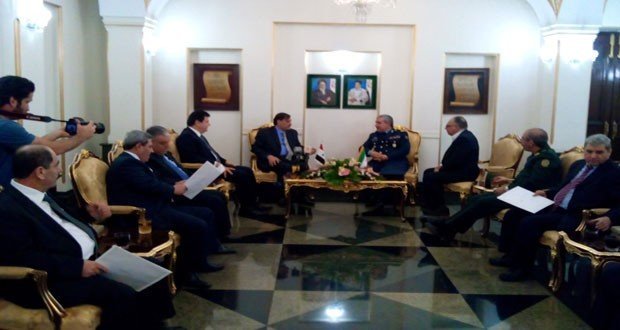 With losses mounting by the Assad regime, Syria’s defense minister started an official visit to Iran on Tuesday at the head of a military delegation to beg for help. Syria’s SANA news agency dubbed the visit as cooperation “in the face of terrorism”.

Minister Fahad Jassim al-Freij, who is also deputy commander of the Syrian armed forces, met his Iranian counterpart Hossein Dehghan and other officials, SANA said, publishing a picture of the meeting.

The two-day visit comes as the Syrian military is facing increased pressure from Islamists rebels groups on the ground there. The army has been losing ground to rebels who are edging closer to the coastal province of Latakia, an important government-held stronghold, and home to many leading the Ba’ath Party.

The visit was aimed at “strengthening coordination and cooperation between the two armies … especially in the face of terrorism and common challenges in the region,” SANA said. In other words, Syrian Defense Minister in Iran begging for help

On Monday an alliance of Islamist rebels including al Qaeda’s Nusra Front wing seized an army base in the northwestern province of Idlib, days after capturing Jisr al-Shugur, a key town some five miles away from the Assad strongholds in Western Syria.

The fall of Jisr al-Shugur marked a major turn around in Syria’s civil war in favor of the rebels. The rebels are attempting to push the Syrian military out of the Idlib province completely after seizing the provincial capital last month.

Iran has been responding to Assad’s demands to the tune of up to $30 billion annually. Iranian aid also included materials and fighting men. With the Houthis on the retreat and Assad losing ground, Iran, for the first time, finds itself, thanks to King Salman of Saudi Arabia, losing ground in its quest to conquer the region and subject its people to its zealotry and madness.

Portions of this article were provided by Reuters.