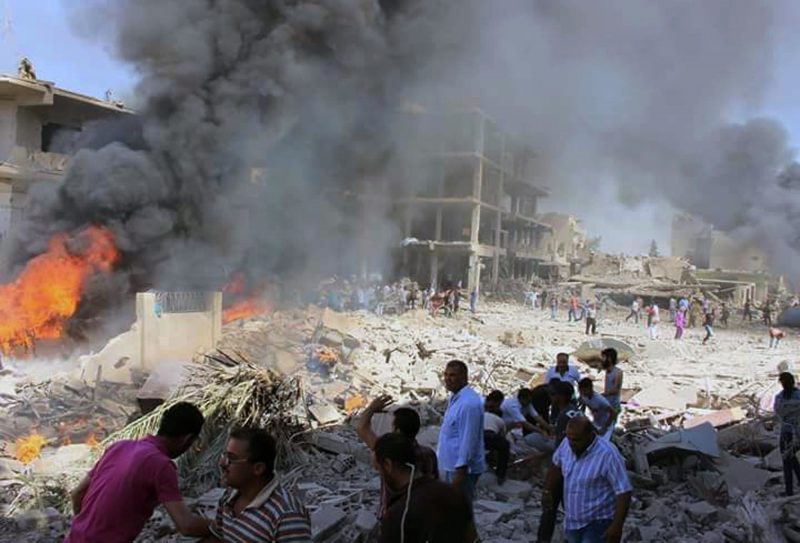 The Middle East is going through a rotational phase of suicide attacks, car bombings, and IED’s. It is our own enlightenment but with more oomph than the boring western Renaissance. For those who think Assad has won, here are two cold-water-in-the-face stories to open our eyes. Both by Reuters news service. Syrian civil war goes underground.

Suicide bombers disguised as farmers struck an army position in western Syria on Tuesday in an attack that killed three people and all the militants, Syrian state-run media said.

The Ansar al-Tawheed group said three of its fighters had carried out the attack on the checkpoint in Taybat al-Imam, north of Hama city. In a statement, it said 30 members of government forces had been killed and wounded.Islamist extremists attacking fascist extremists.

Think Islamic extremists attacking fascist extremists. Both sponsor terror galore upon the innocent civilians of Syria. Who is bereaving?

Then in another corner of the country, another terror attack highlights another war-in-war panoramic view of Syria’s landscape today.

A bomb attack in the Syrian city of Raqqa killed eight people on Tuesday, including four members of the U.S.-backed Syrian Democratic Forces, a security source in northern Syria said.

The blast also killed four civilians and wounded three members of the Kurdish-led internal security forces known as the Asayish, the source said.

Witnesses said people including SDF members gathered at the scene after the first blast, which was followed by a bigger explosion that caused the casualties.

This quadruple hit does not even touch other countries involved in Syria’s civil war like Iran, Russia, Iraq, or Hezbollah from Lebanon. Just imagine if each country unleashed terror on each other. That’s how convoluted this war has become. Several countries supporting several groups each with its own agenda. And Assad caught in the middle trying to herd the hyenas, the foxes, the eagles, and the bears.

Good luck with that.

The Syrian civil war goes underground using hit and run terror tactics. It won’t be long before Iran proxies others to do their bidding as well. If the Assad regime wants the civilians to fear him again using torture, others want Assad troops to fear them using suicide bombers. This is a game of dominoes now. All gone underground.