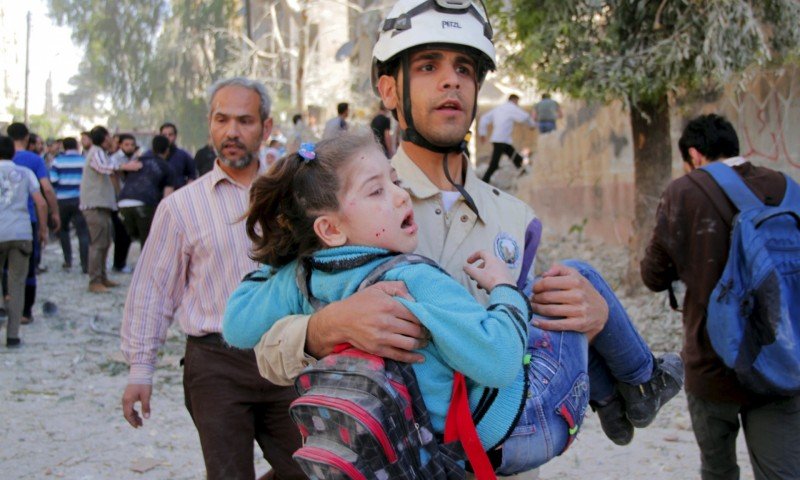 May 3, 2015 6:17 pm 0
Assad bolstering ISIL
Stop the barrel bombs: the deadliest weapons in Syria’s civil war
US should use radar to warn civilians of Syrian barrel bombs, group demands

Children were killed and wounded in Aleppo on Sunday in a barrel bomb attack that destroyed a building where students were sitting exams, residents and rights groups said.

At least seven people were killed, including four children and a school teacher, and dozens were wounded in the air strike that targeted the Seif al-Dawla teaching centre. Rebel authorities accused the regime of “barbaric” targeting of schools and kindergartens in the city as a protracted conflict for Syria’s largest metropolis intensifies.

Videos and photographs posted by residents and citizen journalists on the scene showed civil defence workers and civilians pulling corpses and the wounded from the wreckage, as well as children with bloodied faces in burial shrouds.

“They call these the terrorists,” one volunteer says in a video as he wraps one of the children in a burial shroud.

Zaina Erhaim, a journalist in Aleppo who lives close to the district that was allegedly struck by the barrel bomb and blogs about events in the city, described chaotic scenes in the aftermath and parents rushing to the scene in search of their children.

“Two girls around six in the nursery across [from where the barrel bomb struck] were crying and bumping into each other,” she wrote on her blog, describing their anguish as they spoke to a passerby. “One of them asked him: ‘uncle, so we haven’t died?’”

The bombing prompted local rebel authorities to shut down schools and cancel final exams for students, saying the move was aimed at “protecting the lives of students and teachers from the deliberate, barbaric bombing on schools, institutes and nurseries”.

School enrolment in Aleppo, which has been devastated by three years of war, has fallen to 6%, according to a recent report by the charity Save the Children.

Aleppo, Syria’s commercial capital, is a key battleground between Bashar al-Assad’s regime and the mostly Islamist rebels who share control of the city. Hundreds of Islamist fighters died early last year in an offensive that ousted the terror group Islamic State from the city.

The Assad regime launched an offensive in February aimed at encircling the rebels and cutting off their supply lines into Aleppo, but the campaign failed after facing determined resistance from the opposition.

Last week, the rebels announced a new coordinated offensive to “liberate” Aleppo from regime control and have launched raids and dramatic underground bombings near areas under regime control.

Rebel gains in the north, particularly in Idlib province, also threaten some of the regime supply lines into Aleppo.

Aleppo has long been the target of what rights groups say is indiscriminate aerial bombardment by government forces. In February, Human Rights Watch said the regime used conventional air munitions and barrel bombs on more than 1,000 sites that endured major damage in Aleppo between February 2014 and January 2015, despite a UN security council ban on the use of indiscriminate weapons such as barrel bombs.

Barrel bombs are improvised explosives dropped manually from planes or helicopters and are widely seen as inaccurate, and their use is seen by some as a de facto war crime.

Rights groups have also accused the regime of using barrel bombs on medical facilities as well as in residential areas, near mosques, schools and markets. Fifteen children were killed in a barrel bomb attack last year on a mosque operating a makeshift school in Aleppo, according to the pro-opposition Syrian Observatory for Human Rights.

Rebels have also been accused of using indiscriminate weapons on regime-held areas, including the “hell cannon”, which is improvised artillery that uses gas cylinders as shells to level buildings.

What Did Kerry Trade for Assad’s Barrel Bombs?
US should use radar to warn civilians of Syrian barrel bombs, group demands
The Carnage of Barrel Bombs in Syria
Assad Genocide 429