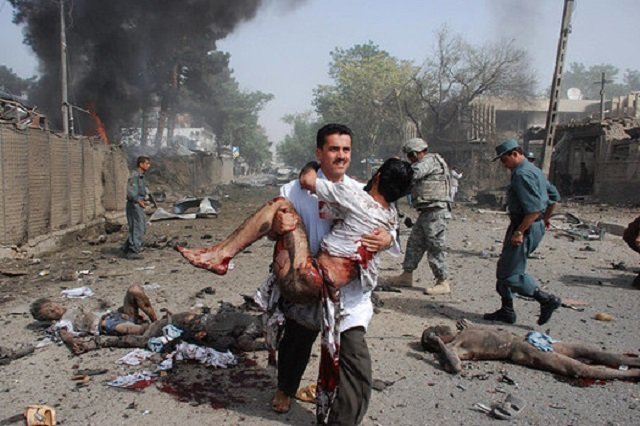 Let us, once and for all, shatter this myth Vladimir Putin has introduced to make everyone feel good about invading Syria. Russian troops are in Syria not to defeat ISIS, they are in Syria to defeat Assad enemies and ISIS, which Assad forged, ain’t one of them.

The real Assad enemies is the Army of Conquest, which is an amalgamation of moderate and Islamist forces whose goal is to depose Assad and the thugs in his regime. ISIS, on the other hand, has never called for regime change in Syria.

The Army of Conquest has the support of the Syrian people because they know the alternative is Assad gassing them while they sleep. In other words, Syria to Russia will be what Iraq was to America. The death of Russian troops is as certain as taxes are.

The enemy Russia will be fighting is unlike any they have witnessed before. In Afghanistan, Soviet helicopters used to spray civilians with impunity until the CIA helped the Afghani people defend themselves. Eventually, the Soviet Union exited Afghanistan with its tail between its legs.

No one expects America, under this administration, to aid Syria’s Army of Conquest with military hardware to change the balance of power on the battlefields of Syria. But lack of a military advantage has been substituted by sophisticated suicide attacks that not even the Assad regime has been able to anticipate or defend against. Suicide attacks singlehandedly conquered every Assad army and air bases.

To defend against suicide attacks, key is to be on alert every minute of the day as if the attack is imminent within seconds. No army on earth is capable of such alertness. Eventually, someone riding something will slip through the relaxed cracks to target Russian troops wherever they are.  Syria to Russia will be what Iraq was to America. It is a question of when and how, not if.

Hezbollah, with all the training that confronted Israeli troops in 2006, is unable to defend against the Army of Conquest. So far, 150 Hezbollah fighters perished in Zabadani alone.

Only three weeks ago, the Hezbollah propaganda was predicting a quick victory in Zabadani. The small summer town has been bombarded by 1,000 barrel bombs, endless MiG sorties, and multi-front attacks by Hezbollah and the Assad feared 4th Army. Yet, Zabadani remains in the hands of the Army of Conquest despite the fact they have no anti-aircraft missiles and no heavy armor.

Assad failed to win the war. Hezbollah failed to win key towns like Zabadani, Jisr al-Shugur, and Sahl al-Ghab, Iran failed to dislodge the Army of Conquest from the Damascus suburbs. And Russia will fail as well. It is almost guaranteed. Syria to Russia will be what Iraq was to the U.S.

Russia does not adhere to burial rituals that spotlight martyrdom, which may prevent us from knowing the number of body bags Putin will use to take his troops home. It may be a while before we get a sense of how, where, and when Russian troops stationed in Syria are dying. Only then, Putin may realize the folly of supporting a regime most of the Syrian population want to see removed from power to face justice for its horrific crimes.

Will it be too late by then? Will the Islamists refuse negotiations if they sense victory? Yes to those two questions.

Russia is making a big mistake in not working with the U.S. to find an alternative to Assad acceptable to all parties. By the time it realizes that mistake, it will be too late. Syria to Russia will be what Iraq was to America.

The same thing happened to Barack Obama. By the time he realized he should have helped the moderate defectors from the Syrian army, the Islamists have taken control. It was too late.