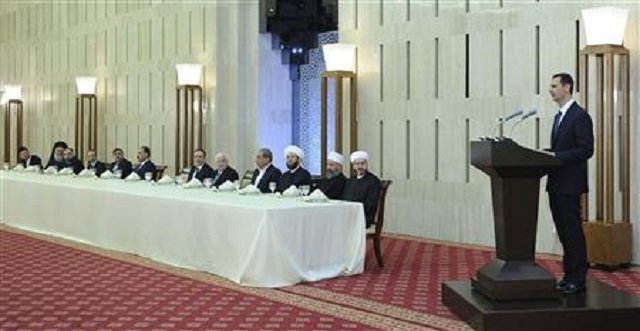 Syria seeks to tap frozen bank accounts to step up purchases of food stocks including wheat, as civil war and a deepening humanitarian crisis push the psychopath Baschar al-Assad to seek new ways to feed his people.

The country faces its worst wheat harvest in nearly three decades due to the conflict, dealing a blow to Assad’s plan for self-sufficiency in food that was aimed at sidestepping Western moves to isolate and weaken his government through sanctions.

Syria’s economy has been hurt by depletion of foreign reserves that were estimated at around $16-18 billion before the conflict.

“The sheer scale of the economic and infrastructural devastation in Syria has necessitated a sharp rise in the import of food staples such as grains and sugar,” said Torbjorn Soltvedt of risk consultancy Maplecroft.

“With the situation likely to deteriorate over the coming months, the Syrian regime also knows that it needs to boost stocks in order to supply regime-held areas.”

Foodstuffs are not covered by international sanctions, but banking sanctions and asset freezes imposed by Washington and Brussels as well as war created a climate that had made it difficult for some trading houses to do business with Damascus.

In recent weeks Syrian state buyers have issued a series of tenders for wheat, sugar and rice amounting to over 500,000 tonnes in total.

The tenders say payment will be made from frozen accounts with waivers obtained from countries that have imposed financial sanctions, according to documents reviewed by Reuters and confirmed by trade sources active in potential deals which will close this month.

“Syria has funds in banks in Europe and the Middle East and they are trying to use these accounts to pay for imports of commodities and foodstuffs by the government,” said a Middle East-based source active in the food trade with Syria.

“The Syrian authorities do not have much choice and need to find ways to pay potential suppliers and tackle the humanitarian crisis in whatever way they can. They have to feed the people.”

After difficulties securing grain supplies last year, Syria has been more successful at purchasing grain this year using middlemen to set up deals and arrange payment. Trade sources say efforts to use the locked funds are aimed at stepping up procurement efforts.

“Although it is unclear to what extent the regime has been able to tap into frozen assets, the worsening humanitarian situation may compel Western governments to unofficially allow such funds to be used for purchasing food staples,” Maplecroft’s Soltvedt said.

Trade sources said some of the frozen bank accounts that might now be tapped were located in European countries including France and Italy.

A spokesman for EU foreign policy chief Catherine Ashton said: “Trade in humanitarian goods, such as medicine or food and food commodities with Syria is not prohibited, nor are there restrictions on payments for such transactions. Clearly, any transactions must respect all other sanctions provisions.”

He said under an article in the bloc’s regulations on Syria, “the release of frozen funds or economic resources may be authorised when this is necessary for humanitarian purposes”. That would require permission from authorities in the country where the bank was located.

“As the derogations under Article 16 involve an authorisation regime, any transaction for humanitarian purposes involving frozen funds or economic resources must be authorised by the competent authorities of the member state involved.”

The spokesman said details on authorisations were provided by member states and was unable to give further comment.

Officials in Paris did not respond to requests for comment on behalf of the French government for banks located there. A spokesman with Italy’s foreign ministry said: “So far, Italy has not authorised any unfreezing of Syrian funds to pay for purchases of food products. In the future we will see.”

It was not immediately clear whether any of the transactions would be subject to sanctions imposed by the United States. A U.S. Treasury spokeswoman said the focus of Washington’s sanctions was on “targeting the Syrian government and those contributing to the tragic violence in Syria”.

“Even as we continue to implement and enforce our rigorous sanctions regime against Syria, we are committed to allowing legitimate humanitarian assistance.”