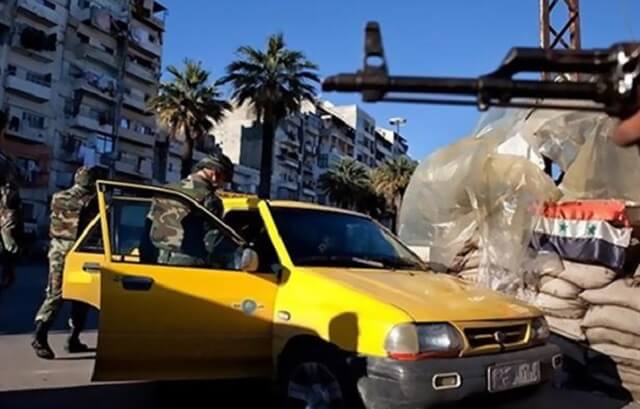 November 2, 2015 10:54 am 0
Watch What Happens When You Kill Americans
Genocidal Maniacs Outrage by Assad and Hezbollah
Syrian Bonds? Better Than Google’s First IPO

Security forces in Syria’s capital have been conducting an arrest campaign aimed at pressing young men into fulfilling their mandatory military service, according to activists.

Reports of increased security measures in Damascus began to emerge in mid-October, with the pro-opposition Shahed News reporting on October 16 that security forces had set up impromptu checkpoints throughout the city to check the papers of young men and ensure that they have not avoided conscription into Syria’s armed forces.

The pro-opposition Masaken Barzah Facebook news page on October 18 published a photo purporting to show one of the impromptu checkpoints in action as a public transport van and bus pass by it.

Asharq Alawsat reported on the heightened security steps last Friday, citing residents as saying that an arbitrary detention campaign was being conducted inside neighborhoods in central Damascus.

“Young men are being arrested at impromptu checkpoints or after [security] searches [of] public buses,” the Damascus residents told the paper.

The report also published part of a statement released by activists in the city warning young men not to walk around on the streets after working hours or on the weekend because of the danger of being arrested.

“A piece of advice for those who want to leave their homes: do not go out unless it is [absolutely] necessary,” the statement cautioned.

“Avoid going out on weekends and after working hours are over.”

“Make sure to time leaving the house to coincide with peak activity in the street because at this time there are less of the security apparatus’ impromptu checkpoints that arrest young men.”

Meanwhile, the pro-opposition All4Syria cited activists as saying that regime checkpoints have grown in number in recent days, with security officers focusing especially on checking the papers of young men.

“The people manning the checkpoints order them to show documents proving that they have completed their military service or been excused. If they [cannot provide the necessary documentation] they are arrested immediately. After this they are sent to the front lines,” the sources told the outlet.

The report added that plain-clothed intelligence service members have deployed throughout Damascus to man these impromptu checkpoints.

All4Syria said it documented the arrest of over 100 young men in the past two weeks, with a number of them being released after they established they had complemented their military service.

“The remainder have been sent to barracks responsible for troop mobilization where they are sorted into military units and sent to active fronts,” the report added.

A media activist going by the name “Abu al-Qasim al-Dimashqi” told All4Syria that the regime is currently carrying out a general recruitment campaign for its forces.

Men born between 1983 and 1988 are being called up for reserve service in very large numbers, Dimashqi said.

He further claimed that  Syrian army’s recruitment branch has a list of 500 wanted names in Damascus’ Roken Eddin neighborhood and 400 from the nearby Qalamoun region, he explained.

The activist told All4Syria, that on Wednesday, when he was near the Justice Palace, he saw regime forces members who were hiding in shops in the area grab young men as they passed by and demand documentation proving that they had completed their military service.

He also said that two checkpoints had appeared in the central neighborhoods of Shaalan and Afif.

In another incident, Dimashqi said that on October 18 he had seen two busses loaded with about 35 young men, who had been arrested by regime forces, near Al-Jahiz Park in the Maliki neighborhood, which is close to the area’s Badr Mosque.

Meanwhile, activists in the Damascus’ Tijara neighborhood said that most of the cellars under residential buildings in the area had been converted into military barracks where regime forces members are now permanently stationed.

According to the activists, the cellar of every building near a checkpoint, security branch or strategic area has been commandeered by members of the police and intelligence services.

The Syrian regime has faced serious manpower shortages for its armed forces in recent months, relying on foreign troops—including Hezbollah, Afghans, Iraqi militiamen as well as Iranian servicemen—to bolster its campaigns across the war-torn country.

In late May, Syria announced the formation of a new brigade for its coastal region in a bid to recruit Alawites.

“In the cities, towns and villages of the Syrian coastal [region] a pamphlet has been distributed calling on the area’s inhabitants to join the Coastal Shield Brigade,” the Syrian Observatory for Human Rights reported May 30.

The announcement of the new Coastal Shield Brigade comes as the Syrian government has scrambled to recruit young men into its army.

The Observatory noted that the campaign had come after “70,000 cases of [young men] skipping compulsory military service and reserve service in provinces that are either fully or partially controlled by the regime.”

Reports have emerged in recent months that the Syrian government has begun to arrest youths avoiding military service, including in the Alawite-populated coastal region where it counts on strong support.

Understand the tragedy of Barack Obama
ISIS edges towards the heart of Damascus
Asma Honey, Where is The Money?
Syria News 1213 Syrian Revolution 1335