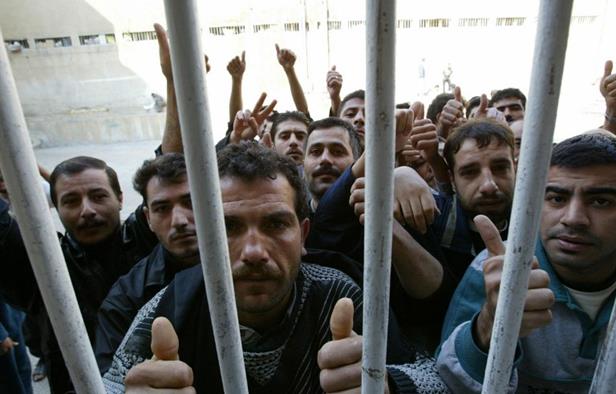 Prisoners in the sweltering, overcrowded Adra prison on the outskirts of Damascus were presented in June with an unusual offer from the Syrian regime, which promised amnesty if they agreed to fight on the front lines.

About 200 inmates decided to risk their fate on the battlefield rather than serve out long sentences in dismal conditions, according to army officers, a lawyer who represented some of the prisoners and other people with knowledge of the deals.

Even as airstrikes by the regime’s Russian allies bolster its fortunes, the Syrian military’s ranks are severely diminished by death, defection and draft dodgers, and stretched thin on multiple fronts. As a result, it is not only freeing prisoners but also ordering state employees and teachers into battle.

Checkpoints in cities are increasingly manned by minors, older men or young men with medical conditions that should exempt them from military service. Residents in Damascus have reported seeing even Russian, Afghan and other foreign soldiers at checkpoints, something that was unheard of until this year.

The mass enlistment, though meant to address a weakness, reflects the ambitions of an emboldened regime that is benefiting from strong support from Russia, Iran and allied Shiite militias, and is trying to maintain its own forces.

President Bashar al-Assad’s regime is looking to extend its reach beyond its core areas of control, for which it needs large numbers of fighters. The regime, which has lost control of much of Syrian territory to opposition rebels, Islamic State militants and Kurds, is intent on keeping at least a foothold in every province.

“They have tried just about everything they can think of to fill that deficit and still they don’t have enough. So we see these periodic recruiting drives,” said Jeff White, a defense analyst at the Washington Institute for Near East Policy.

Last month, regime forces backed by fighters from the Lebanese Shiite group Hezbollah and Russian airstrikes succeeded in fully encircling the rebel-held half of Aleppo, laying siege to an estimated 300,000 civilians and rebels in an attempt to force the fighters to surrender.

On Sunday, rebels launched a counteroffensive to open a corridor into the besieged neighborhoods and are now pitted against some of the fighters swept up in the regime’s recent efforts to boost its ranks.

World leaders who have long called for Mr. Assad’s removal are now more focused on defeating the extremist Islamic State in Iraq and Syria and dealing with a wave of militant attacks across Europe and the U.S. Washington’s once firm stance against the regime has softened as it proposes close military coordination with Mr. Assad’s strongest military backer, Russia.

“They seem more relaxed,” a Western diplomat who visits Syria regularly said of the regime. “The overall context is in their favor.”

Last year, the outlook for the regime appeared bleak amid a string of defeats at the hands of rebels. But Russia’s military intervention in September changed the regime’s fortunes and its tone. The regime staved off rebel advances and launched military operations in areas where it had been on the defensive, including in Aleppo.

In June, Mr. Assad vowed to take back “every inch” of Syria.

“What is happening is simply the Syrian army has been given a big advantage, which is the Russian military intervention,” said Yezid Sayigh, an associate at the Carnegie Middle East Center. “The Syrian regime has always been fighting for the whole of Syria. The regime now still faces a long fight, but it’s gradually increasing its edge over the opposition.”

Syria’s army before the 2011 conflict was estimated to have 400,000 soldiers and officers. Now, Global Firepower, a military analysis website, puts Syria’s regular army at only 180,000. The site also says that there are 570,000 active reserve personnel. Many of the reservists join the National Defense Forces or one of many other pro-government militias.

Three months ago in northeastern Hasakah province, hundreds of state employees were ordered to report for brief military training. They were taught how to assemble and shoot Russian-made weapons and how to conduct raids, and they were given uniforms with the slogan, “We are Assad’s soldiers,” one of the employees said.

Amnesty offers have been made at other prisons in addition to Adra, but have been widely rejected, opposition activists said.

Shiite fighters from Hezbollah, Iran’s Revolutionary Guard, Iraqi militias and Afghan mercenaries have played a crucial role in enabling the regime to survive but most estimates put their ranks at only a few thousand.

For years, checkpoints in government-controlled cities have been used to sweep up men between the ages of 18 and 42, because so many of them are dodging the draft. Men under 42 who have already served are increasingly being called up for reserve duty.

“They are calling more and more reserves,” the Western diplomat said.

Men, in turn, often avoid checkpoints, either traveling by foot or rarely leaving the house.

The regime has resorted to erecting temporary checkpoints to catch unsuspecting men or even conducting home raids to find those who are wanted.

Jaber, a 30-year-old hair stylist, rode in a bus and crossed the same checkpoint every day for years. But on a recent morning, he said, soldiers at the checkpoint called his name.

He spent two weeks in a military training camp before being told he would be sent to eastern Deir Ezzour province to fight Islamic State militants. Desperate to avoid battle, he paid a $5,000 bribe.

That was once enough to get out of military service altogether. But now, it was only enough to get him a desk job in Damascus with open-ended reserve duty.