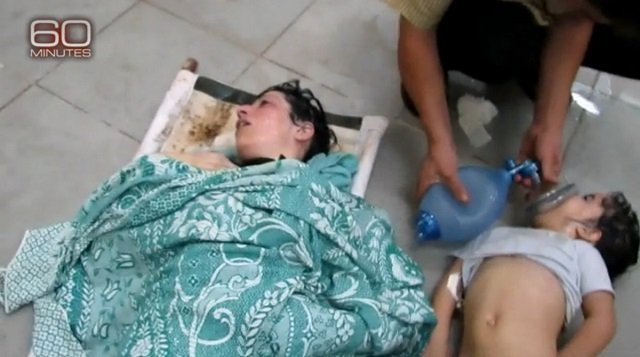 August 21, 2013 7:11 am 0
Hezbollah is Cornered, Thank the Syrian People
Arab VP’s: Soon the Most Endangered Species
Holy-wood in Syria

Syrian opposition activists Wednesday accused the government of killing scores of civilians, including women and children,  in a poison-gas assault on rebel strongholds outside Damascus.

The official Syrian news agency called the reports “untrue” and designed to derail a United Nations inquiry into charges of chemical weapons in the conflict.

Opposition activists say the number of dead may be in the hundreds.

There was no independent confirmation of the allegations.

The fresh allegations come as a U.N. inspection team is in Syria conducting a long-delayed investigation into charges of chemical weapons use there. Each side has accused the other of deploying chemical weapons in the more than two-year conflict.

The Syrian war has featured numerous allegations of massacres by both sides. A lack of access for journalists and human rights investigators has hampered independent investigations. Human rights groups say both sides have committed extra-judicial killings during the bloody conflict.

In its statement, the official Syrian news agency called the allegations of a chemical weapons attack “completely baseless,” and said the aim of the reports “is to distract the U.N. chemical weapons investigation commission away from its mission.”

Pro-opposition activists said the alleged chemical weapons attacks occurred early Wednesday in the so-called Ghouta region, an opposition bastion outside Damascus, the capital. The Syrian military has been methodically pursuing an offensive aimed at driving rebels away from the sprawling Ghouta zone and other areas near Damascus.

Images posted online by opposition activists purported to show  bodies of victims from the chemical attack, including women and children. The images could not be independently verified.

The Syrian Observatory for Human Rights, a British-based pro-opposition group, said the government’s use of “poisonous gases” had caused “dozens of deaths and hundreds of injuries.” The group called on the U.N. inspection team in Syria “to head directly to these devastated areas in order to verify and investigate these reports … as well as to immediately provide the badly needed aid and medical treatment to the people in these areas.”

Ake Sellstrom, the Swedish scientist who heads the U.N. inspection team in Syria, told Swedish media that he had seen only the television images of the alleged attacks.

“But the high number of wounded and dead they are speaking about sounds suspicious,” Sellstrom told Swedish news agency TT, via telephone from Damascus. “It sounds like something one should take a look at.”

The U.N. has said its inquiry is limited to three alleged instances of chemical attack. Whether the team’s mandate could be expanded to include the latest allegations was not immediately clear.

On Wednesday, in a separate incident, the Syrian government alleged that its forces had uncovered a “mass grave” of civilians shot and stabbed  by “terrorists” — the government’s term for rebels — in northwestern Latakia province, where battles have been raging between rebels and the military.  There was no independent confirmation of the allegation.

The Free Syrian Army vs. the Syrian National Council — Which Should We Support?
Kofi’s Cloak of Terror
The U.N. Wolf That Feeds on Civilians
Assad Genocide 405