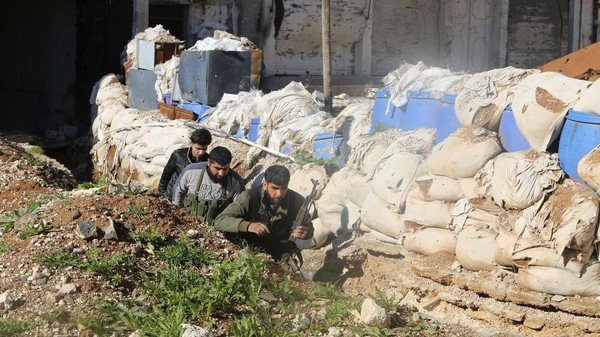 January 25, 2015 9:07 pm 0
Saudi Arabia strikes back
The Overrated Assad Vacuum Crybabies
The Emails Imaging the Souls of the Assads

Syrian insurgents including fighters from al-Qaeda’s Nusra Front, seized an important government army base in the southwestern Deraa province on Sunday, fighters who took part in the battle said.

The base, one of several used to pound rebel-held villages and towns in southern Syria and along the frontier with Jordan, lies at the heart of a heavily fortified zone which has formed a southern line of defense protecting the capital, Damascus.

The fighters said hundreds of insurgents armed with rocket launchers and anti-aircraft weapons had taken over the Brigade 82 base near the town of Sheikh Maskeen, close to the main north-south highway between Damascus and Jordan.

“This advance will help us cut supply routes of the regime forces in the south from their supplies in the north to be able to eventually take over Deraa city,” — Colonel Saber Safar

(Colonel Saber Safar is a leader of the First Army, a major faction of Western-backed rebels in the “Southern Front” grouping).

The rebel gain is the latest advance in the south, where al-Assad’s forces have been on the defensive, losing control of large areas of countryside as well as parts of the border along with Israel near the Golan Heights, according to regional military experts and diplomats.

Fighters said the capture of the base had helped them to overrun most of the nearby town of Sheikh Maskeen, which they have attacked several times in last few months, but failed to seize.

The town is one of the main army supply routes to the city of Deraa, along the border with Jordan that was mainly in government hands.

The south is the last major stronghold of the mainstream, anti-Assad opposition, who have been weakened elsewhere by the expansion of the ultra-hardline Islamic State group in the east and north, and gains by the Nusra Front in the northwest.

However, Nusra is fighting in the south alongside the Western-backed groups, who have proved more united there than in other parts of Syria.

In a separate development on Sunday, Islamist fighters struck the Syrian capital with at least 38 rockets, killing seven people, a monitoring group said, in one of heaviest attacks on Damascus in over a year.

The Saudi-backed Islam Army had warned earlier that it would hit back against an air strike last week in the eastern Ghouta region near Damascus, in which more than 40 people were killed.

Provided by Reuters Amman and redacted for RPS

Why Assad is Not Winning Big With Big Russian Air Strikes?
I get it now, Assad is protected to torture Israelis
Where Does Israel Stand on Assad Remaining in Power?
Syria News 1213 Syrian Revolution 1335