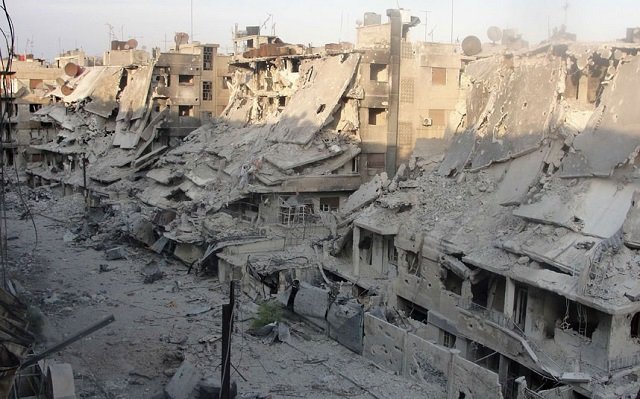 Syria is the Superbowl of Islamic Fanatics

Think about it. Syria today is home to the most extremist and brutal Islamist savages on the planet. Syria is home to the Superbowl of Islamic fanatics.

For one, the Iranian Mullahs with their Hezbollah and IRGC trolls are facing off against ISIS, the Muslim Brotherhood, and al-Qaeda. What could be worse? Absolutely the most damnatory and violent elements in Islam are all in Syria. One place, and one time.

Syria is home to the Superbowl of Islamic fanatics, extremists, radicals, and the most heinous and hideous sick men that exist.

Syria is home to the secular architect behind all this terror: Baschar al-Assad himself. He freed Islamist terrorists from his prisons and welcomed Iranian terrorists with open arms. A secular Muslim who started the Muslim war of extremists. Is it a surprise that Hitler and Stalin were also seculars?

Why are we surprised that there are efforts underway to split Syria? Who would not design such a fate for a country a la Yugoslavia when you see this Superbowl of Islamic fanatics all violent and all vying to control the country? Syria is a soup of wolves that no one cares to invest the time or the energy to clean.

Unfortunately, caught in-between this horror movie are the innocent civilians, women and children, and passive Syrians who have never harmed anything or anyone in their lives. They are poor, helpless, and have no friends in the world. They have no lobby in Washington, or Brussels. All they have are well-meaning and courageous NGO’s standing by them while Putin cheers their killing.

Syria has become the Superbowl of Islamic fanatics. Would you not try and split it to weaken those controlling its destiny? This is the view from outside Syrians refuse to accept.

So drink to Syria, to Kurdistan, to Sweidastan, and to Alawistan. As much as we want to resist this reality, extreme Islam will split Syria into pieces.

Syria is the Superbowl of Islamic Fanatics