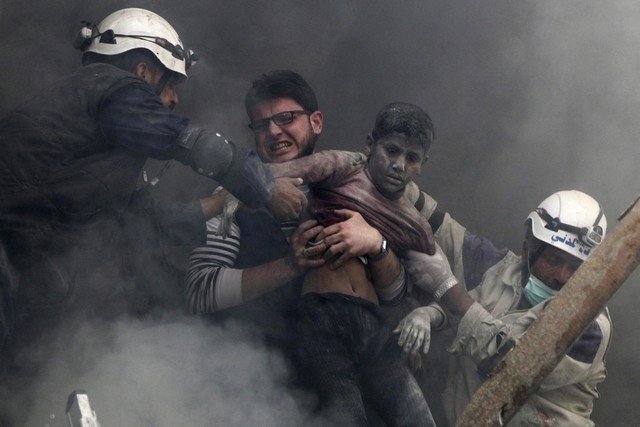 Source: The National – by Hassan Hassan (Syria is Caught Between Bombs and Butchery)

Consider two heart-wrenching scenes that recently emerged from Syria. The first one is of children lining up behind 25 soldiers in the historic city of Palmyra, pointing pistols at the soldiers’ heads. The second is of a child killed in his Aleppo home by a barrel bomb that failed to explode.

In the first scene, shown in a video released by ISIL recently, the 25 soldiers are on the stage of a Roman amphitheatre and the child executioners parade before they line up behind them. A photo shows the bloodstained, lifeless child in Aleppo in the second clip – he appears to be hugging the unexploded barrel bomb.

It is hard to say which crime is worse. The culprits responsible for the two crimes are among Syria’s worst villains. ISIL is training a generation of Syrian children to be monsters, while Bashar Al Assad’s tactics are damning thousands of children to early graves.

Thousands of Syrian children have lost nearly every aspect of their childhood in this dreadful conflict. Thousands more have lost their lives. One only needs to visit Syrian communities in Turkey or open YouTube to see children who have lost limbs because of arbitrary shelling and bombing.

In ISIL-held territories, the lack of options force many children to join the group. Boredom is made worse by the fact that even if some of them decide to look for opportunities elsewhere, they find all avenues closed.

As a Syrian, I feel guilty about warning a child or teenager against a smuggler’s promise to take him to Europe. I know where their thoughts might head if that desperate option ceases to be a possibility. I then wonder how long sane people can resist as the situation deteriorates.

It is no better in the rest of Syria. Even though ISIL dominates the headlines, the Assad regime remains the top killer in the country by some margin. The daily suffering caused by the regime now rarely makes it to public discussions, but highlighting Mr Assad’s disproportionate violence has practical benefits. Apart from the humanitarian factor, failure to focus on the atrocities committed by both ISIL and the regime distorts the reality and creates a schism between how outsiders and Syrians conceive of a resolution to the conflict.

Nowhere is this clearer than when America’s train-and-equip programme reportedly failed to attract enough recruits because volunteers are asked to focus on ISIL. A year after Barack Obama announced the programme, no more than 200 Syrians joined it. Moreover, even those who have joined the programme will be treated as mercenaries by fellow rebels as long as the focus is ISIL not the regime. Even before the US officials publicly admitted the challenge, it was apparent.

I reported in March that many of those who had joined a previous CIA training programme abandoned it because they found it aimless. This is only one of several examples in which rebels’ cooperation with the outside world is undermined by a misunderstanding of priorities in the conflict.

The situation in the country is getting worse, albeit quietly in most cases. The challenge for now, since a decisive end to the conflict is not likely, should be to minimise the effect of suffering and to support people on the ground.

There are still true heroes sacrificing their lives to help their communities or tell their story. In Aleppo, for example, volunteers risk their lives to rescue those trapped and injured by the regime’s barrel bombs. The effect of the bombs would be much worse if it was not for such volunteers, who say they have rescued nearly 22,000 people after barrel bomb attacks.

These quiet heroes are providing second chances to many victims and their families. Nobody can afford that such heroes give up because the alternatives are groups such as ISIL that are patiently waiting for people to lose hope and steadily reaping the benefits of desolation.

As long as the suffering and sacrifices of people on the ground are overlooked, the world should not expect true partners in the conflict. The savagery of the Assad regime is no less than the barbarity of ISIL. On the contrary, it helps perpetuate it.

Hassan Hassan is associate fellow at Chatham House’s Middle East and North Africa Programme, non-resident fellow at the Tahrir Institute for Middle East Policy and co-author of ISIS: Inside the Army of Terror

When one email makes it all worth it
Imagine Hitler instead of Churchill
Happy you apologized, Mr. President
Assad Genocide 429 Radicalism 567