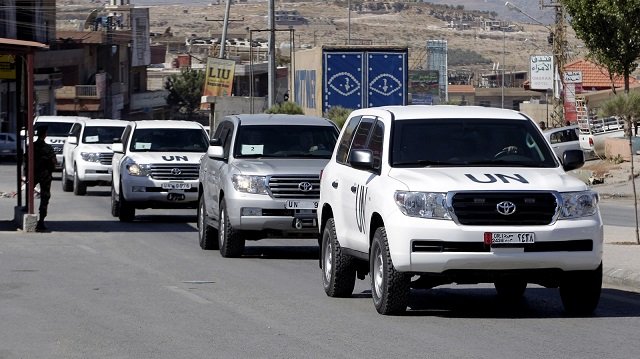 Syria Expected To Spar With Inspectors As Weapons Hunt Begins

October 7, 2013 7:57 am 0
Iranian Concerns Over Long-Term Viability of Hezbollah Grow
Among Assad Supporters, the Most Coded Word is “Assad”
While we were dreaming of ISIS

An international team of weapons experts is at work in Syria on the job of finding and destroying the nation’s chemical stockpile. Inspectors crossed in Syria from Lebanon on Tuesday.

But the job will be difficult and possibly dangerous, says Amy Smithson, a senior fellow at the Center for Nonproliferation Studies at the Monterey Institute of International Studies.

Smithson, an expert in chemical and biological weapons, tells Weekend Edition Saturday host Scott Simon that Syria’s Assad has proven untrustworthy in the past and is unlikely to be completely upfront with inspectors about the location and extent of his chemical munitions.

He may also allow the joint team of experts from the Organisation for the Prohibition of Chemical Weapons and the United Nations to come in harm’s way, Smithson says.

“The U.N. Security Council put the onus for providing security for these inspections on the Assad government, and when the investigators were there previously, it’s very likely that the Assad government turned snipers loose,” she says. “This is a dicey proposition, not in the least part because in the midst of Syria we also have Hamas, Hezbollah and al-Qaida.”

Assad could also be scrambling to make his chemical weapons hard to find.

“If Assad is true to form – and previously he has stalled and delayed and done everything he could to hide evidence of his nuclear weapons program – now’s the time for him to be moving things about and perhaps hiding what he wants to try keep away from the inspectors,” Smithson says.

Making a challenging circumstance even more precarious, the team is operating under the Chemical Weapons Convention, which the Assad regime agreed to in September. The convention is designed for disarmament by cooperating partners, not states whose acquiescence has been coerced.

While the treaty allows access to Assad’s weapons, it also give his government rights, Smithson says. Assad could potentially keep inspectors from certain areas, she says, declaring them irrelevant because they house conventional weapons or “unrelated” records.

“He can fence with inspectors a great deal. I do expect, given his past behavior, to try to hide evidence and maybe get away with what he can,” Smithson says.

Intelligence experts may see through such smokescreens, she adds. However, she says, “previously there have been times when intelligence about chemical and biological weapons programs have been grossly off the mark.”

Smithson expects the team will make significant progress in destroying Syria’s chemical stockpile. The U.S. and Russia have powerful resources at hand to neutralize the weapons.

“There are a number of assets that the United States and also Russia can bring to bear to destroy bulk chemical warfare agents and even chemical weapons munitions,” she says. “These assets involved cargo-container-sized equipment that will put water in the agent and put other chemicals to degrade it with great effectiveness.”

But Smithson is cautious.

“I’m just not sure that Assad, Hezbollah, Hamas and al-Qaida are going to cooperate with this,” she says. “So it’s just difficult every which way you look, but there are definitely practical things that can be brought to bear.”

Syria Expected To Spar With Inspectors As Weapons Hunt Begins