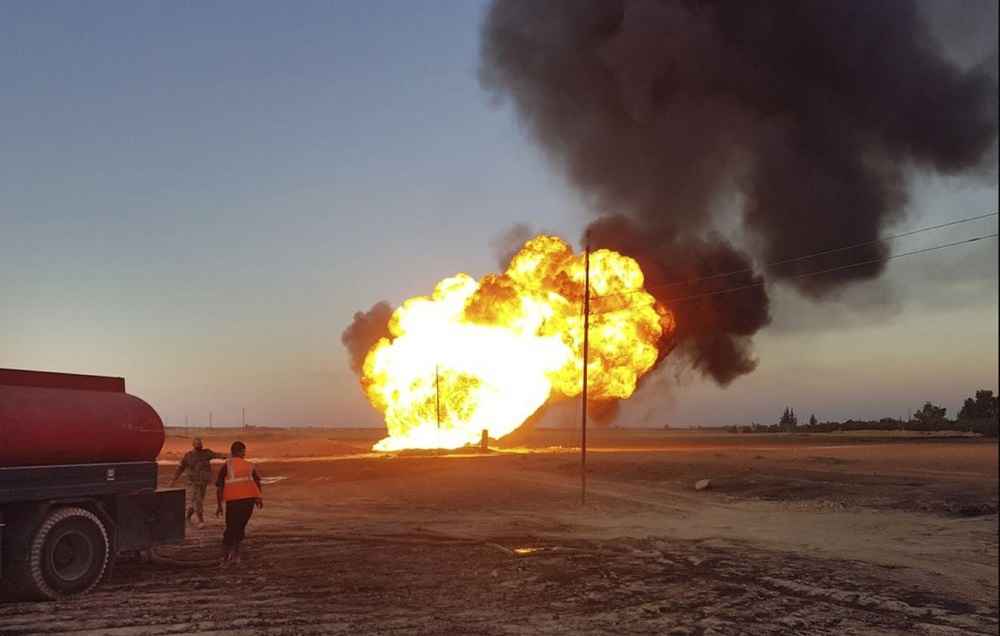 An explosion early on Monday struck a gas pipeline in a Damascus suburb. It caused a huge fire and cut off electricity throughout Syria. As of now, Syria enters the medieval stage because Assad still lives in his Berchtesgaden castle. To ask Assad to give up power through diplomacy has the same impact on him as asking Adolph Hitler to surrender in 1944.

The oil minister, Ali Ghanem, said the explosion struck the line that feeds three power stations in southern Syria. He claims it may have been an act of sabotage, but did not elaborate.

Syria’s oil and gas infrastructure has been hit over the past years by acts of sabotage but no one has ever claimed responsibility for such attacks. The nine-year civil war that has killed more than 700,000 people. It has also badly affected oil and gas fields, many of which are outside government control.

The state news agency SANA quoted Electricity Minister Zuhair Kharbotli as saying the explosion on the “Arab Gas Pipeline” occurred after midnight Sunday between the northeastern Damascus suburbs of Adra and Dumair. Midnight as in the cover of night midnight.

He said it was the sixth time that the Assad opposition hit the pipeline.

NOT THE ISLAMIC STATE

Jeffery, in his own way, was sending the signal to Assad that the U.S. had nothing to do with this attack.

The U.N.-led process has produced few concrete results so far. The United States is going through its optimistic 1944 stages now, believing Assad cannot but surrender. Just as U.S. generals believed after Hitler’s defeat in the Ardennes Bastogne battle.

IS militants have claimed responsibility for attacks over the past months that killed scores of government troops as well as members of the U.S.-backed Kurdish-led Syrian Democratic Forces.

In December, near-simultaneous drone attacks hit three government-run oil and gas installations in central Syria. One of the attacks targeted the oil refinery in the central city of Homs.

Syria has suffered fuel shortages since last year. Western sanctions have blocked imports, while the Kurds control most Syrian oil fields in the country’s east.

Ten Rules of Leadership for Syria
Hollande: Russia’s Intervention Will Not Save Assad
The Irony and Practicality of Western Justice
Assad Must Go 100 Syria News 1210