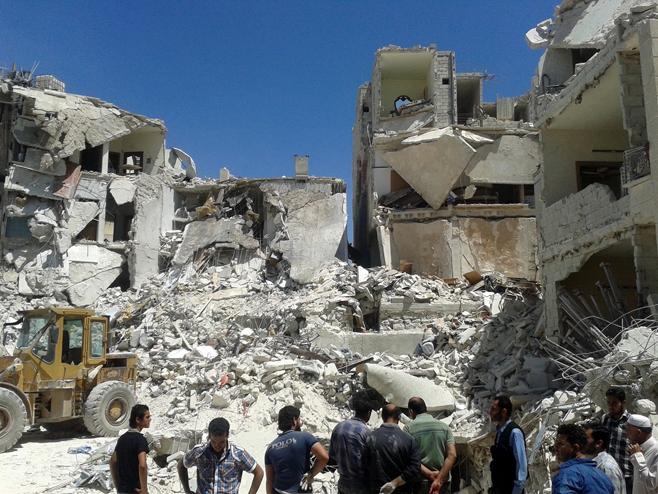 Ballistic missiles fired by the Syrian military are hitting populated areas, causing large numbers of civilian deaths, including many children. The most recent attack Human Rights Watch investigated, in Aleppo governorate on July 26, 2013, killed at least 33 civilians, including 17 children.

Human Rights Watch has investigated nine apparent ballistic missile attacks on populated areas that killed at least 215 people that local residents identified as civilians, including 100 children, between February and July. It visited seven of the sites. There were no apparent military targets in the vicinity of seven of the nine attacks investigated by Human Rights Watch. In two cases there were nearby military objectives that may have been the government force’s intended targets, but were not struck in either attack.

“You cannot distinguish between civilians and fighters when you fire ballistic missiles which have a wide-area effect into populated residentialareas,” said Ole Solvang, senior emergencies researcher at Human Rights Watch. “Even if there are fighters in the area, you cannot accurately target them and the impact in some of these cases has been devastating to local civilians.”

When used in populated areas, ballistic missiles with large payloads of high-explosives have a wide-area destructive effect, and it will not be possible when using them so to distinguish adequately between civilians and fighters, which almost inevitably leads to civilian casualties. Military commanders, as a matter of policy, should not order the use of ballistic missiles in areas populated by civilians, Human Rights Watch said.

It is difficult to draw final conclusions about the legality of an individual attack without knowing the motivation or the information available to the attacking party. But the nine attacks Human Rights Watch investigated caused significant civilian damage with no apparent military advantage.

The repeated use of these high explosive weapons with wide-area effects in areas populated by civilians strongly suggests that the military willfully used methods of warfare incapable of distinguishing between civilians and combatants, a serious violation of international humanitarian law.

While using ballistic missiles in an armed conflict is not prohibited, their use is subject to the laws of war. A warring party is obliged to use means and methods capable of distinguishing between civilians and combatants, an attack should not cause disproportionate damage to civilian lives and property, and the party using the weapons should take all feasible precautions to minimize civilian harm.

According to the Syrian Network for Human Rights (SNHR), a Syrian human rights group, the government used at least 131 long range surface-to-surface missiles between December 2012 and early July. Twenty of the attacks, some using multiple missiles, killed approximately 260 civilians, the group said. Human Rights Watch has not independently verified these attacks.

Many of these missiles appear to have been launched by the 155th Brigade, based in al-Qutayfah in the Qalamoon region in Damascus countryside. Activists who live nearby have filmed the missiles being launched from this brigade’s base and reported the launches on social media sites. SNHR said that more than 35 of the 131 launches it reported were by this brigade.

While many of the missiles landed in open fields or other unpopulated areas, causing little or no damage, several have hit densely populated areas, killing civilians, Human Rights Watch said. Human Rights Watch has investigated the following attacks by interviewing victims and witnesses, reviewing photos, YouTube footage and other published information, and in seven cases visiting the sites:

·      On July 26, a missile struck the town of Bab Nairab, in Aleppo governorate, killing at least 33 people, including 17 children;

·      On June 2, a missile struck the town of Kafr Hamreh, just north of the city of Aleppo, killing at least 29 people, including at least eight children;

·      On March 29, a missile struck the town of Hreitan in northern Aleppo killing at least eight people, including two children;

·      On March 25, a missile struck the town of Ma`dan in Raqqa governorate, damaging six homes and killing at least four people, including three children;

·      On February 22, a missile struck the Tariq al-Bab neighborhood in Aleppo, killing at least 13 people, including eight children;

·      On February 22, a missile struck the Ard al-Hamra neighborhood in Aleppo, killing at least 78 people, including 38 children;

·      On February 18, a missile struck the Jabal Abro neighborhood in Aleppo, killing at least 47 people, including 23 children; and

·      On February 18, a missile struck the town of Tal Rif`at in northern Aleppo, killing at least one girl.

Local residents told Human Rights Watch that all of the people killed in these nine attacks were civilians. Human Rights Watch has not been able to independently verify this claim but the presence of a significant number of children among the victims, the killing of entire families in some cases, that Human Rights Watch could not find any identifiable military target in the vicinity during on-the-ground investigations, and that all witnesses strongly denied there were any military targets in the vicinity of the attack in seven of the cases strongly indicate that the casualties were predominately if not entirely civilian.

Syria stockpiles several types of ballistic missiles, according to the authoritative publication Military Balance 2011 by the International Institute of Strategic Studies. They include Scud missiles, variants of Scud missiles, SS-21 Tochka missiles, and Luna-M missiles.

A Syrian government official denied in February that the authorities had used Scud missiles against the opposition. However, the Human Rights Watch visits to the sites of seven attacks indicate that ballistic missiles were used, based on the scale of destruction and accounts by witnesses that no aircraft were in the sky at the time.

“In towns and cities in opposition controlled areas throughout northern Syria, civilians cannot escape the reach of these destructive weapons,” Solvang said.

Details about the three most recent attacks documented by Human Rights Watch are included below.

Al-Nayrab, July 26, 2013
Local residents told Human Rights Watch that what they believed to be a ballistic missile struck several residential buildings near the al-Hawoz roundabout in Aleppo governorate around 7:45 p.m. on July 26. The residents said they believed the attack was by a ballistic missile because of the extensive damage and because they saw no aircraft at the time of the attack.

An activist working at al-Marjeh Media Center told Human Rights Watch that around that time he heard a massive explosion that shook his office. He followed the dust cloud from the explosion to the strike site, 200 to 300 meters from his office. He said that about 10 homes were completely destroyed and that the impact of the explosion extended across two neighborhoods.

He told Human Rights Watch that he saw seven injured residents, including five children, immediately after the attack. He said that Hassan Yassin, his wife, and their seven children, all minors, died in the attack. Yassin and his family were at home during the attack, he said.

The Al-Marjeh activist told Human Rights Watch that there was no fighting in the vicinity before the attack. During visits to Aleppo over the past year, Human Rights Watch observed that the area was under opposition control and that several buildings located about 300 meters away from the strike site were used as bases for armed opposition groups. These buildings were not damaged in the strike, however, local residents said.

Kafr Hamreh, June 2, 2013
Local residents in Kafr Hamreh, a town in northern Aleppo governorate, told Human Rights Watch that what they believed to be a ballistic missile struck the town around 5 p.m. on June 2. The missile completely destroyed 4 or 5 houses and significantly damaged another 10, witnesses said. Human Rights Watch visited the site three days after the attack and confirmed the destruction.

Initially a town of 15,000 inhabitants, Kafr Hamreh’s population had swelled to as many as 50,000 people, residents said, with people displaced by the fighting in other places. The large number of displaced people in the town was one of the reasons it was difficult to identify all the victims, the local council member said.

The ballistic missile attack on Kafr Hamreh followed intensive artillery attacks by government forces in the morning of June 2, accompanied by a ground offensive against military opposition positions about three kilometers south of the town. A couple of hours before the ballistic missile attack, residents said, the government forces withdrew from the vicinity of the town in the face of resistance from the opposition.

Local residents told Human Rights Watch that they believed that the attack was by a ballistic missile because of the extensive damage and the absence of warplanes above the town at the time of the attack. The residents’ conclusion is consistent with a reported launch of a ballistic missile from a military base near Damascus at about the same time.

At 5:34 p.m. on June 2, the local coordination council in Yabroud in Damascus governorate, which often reports missile launches from the nearby military base of the 155th brigade,posted on its Facebook site that it had observed a “Scud missile” in the sky over Yabroud heading toward northern Syria. The post did not specify when the missile was observed. Human Rights Watch was not able to find any remnants of the weapon that hit Kafr Hamreh and is therefore not able to conclude what kind of ballistic missile was used.

Raqqa, April 24, 2013
Shortly after 11 p.m. on April 24, an apparent ballistic missile struck a residential area near the Shuhada Mosque in Raqqa city, leveling four homes and killing at least two people. Human Rights Watch researchers visited the scene of the strike within half an hour of the attack while residents were searching for the dead and wounded.

Human Rights Watch visited the morgue in the National Hospital in Raqqa the following day and spoke with a relative of one of the men killed in the attack, Mohamed Ayed el Hussein, 30. The relative told Human Rights Watch that Hussein was visiting the owner, Ali Kalab, at the time of the strike and suffered fatal injuries when the missile struck.

An emergency room doctor working at the hospital told Human Rights Watch that hospital staff believed that Kalab was also killed in the attack. He said the neighbors had reported that Kalab was in the house at the time of the strike and that they had located some small body parts, but that they could not locate his body in the rubble.

Yousef Moustafa Ismael, 30, was severely injured. Human Rights Watch researchers spoke to a relative of his in the Intensive Care Unit at the hospital who was caring for him. Ismael was unconscious and in critical condition with a head injury.

Local residents believed that a fourth man, Ali Mazarak, was in the house at the time of the attack, but his body was not recovered in the days following the attack.

Residents believed that the government used a ballistic missile in the attack because of the large-scale destruction, absence of any nearby government positions in the direction the missile came from, and the absence of aircraft at the time of the attack.

Raqqa governorate was the first to come under opposition control. It has been governed by opposition forces since the first week in March. Fighting in the governorate has been concentrated around the three remaining Syrian government military positions there: Division 17, the Tabka airport, and Brigade 93, none of which are near to the Shuhada mosque area where the missile struck. Purely residential areas have also been attacked. On June 20, a Syrian government air strike hit the Intensive Care Unit of the National Hospital in Raqqa city.

Obama Stands Blameless for a New Class of Extremists in Syria
At least 35 civilians killed in Aleppo
What Use is Killing Bin Laden if Policy Grows Another 100?
Assad Genocide 429