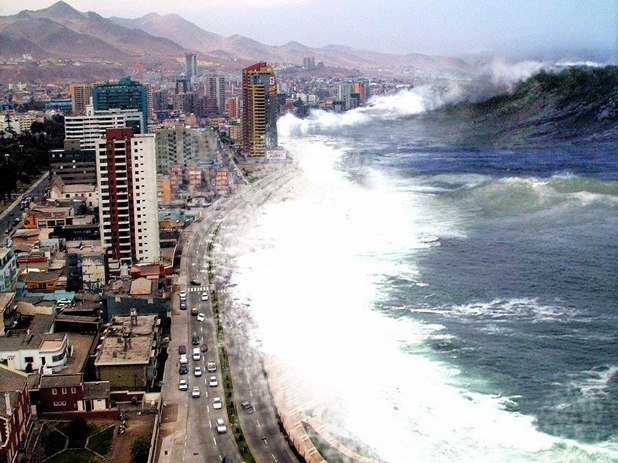 The low-level tremors began the moment the White House ordered strikes against the terror of ISIL and ignored the terror of the Assad and the Iranian regimes butchering Syrian civilians. A Sunni Tsunami is coming ashore without any warnings.

Worse yet, those who control the sensors that read the data are hiding from us the impact of their detrimental and disastrous foreign policy leading to a Sunni Tsunami.

Here is a story to rattle the White House from its dangerous slumber. A French Jewish girl joins ISIL.

The French intelligence foreign operations services, known for their acronym DGSE, would never tell us the reasons why even if they knew it; however, I am almost certain that the actions of the unnamed Jewish French girl, and those of another 100 French young girls who have joined ISIL, are not to fight against the Kurds or free Kobane.

Theirs is an ideological battle against injustice and the immoral disregard for human lives and sufferings our president is ignoring when Assad continues barrel bombing women and children.

An article published by The Star of Toronto makes the assertion that these young girls are falling prey to an organized recruiting machine. There is no doubt this is the case, but any effective recruitment must have an effective message to lure the recruited. In the case of the US Navy, the lure is “See the World.” In the case of ISIL, it is “Save Women and Children.” Whatever the message is, Obama created the conditions for its echo when he refused to strike the Assad regime thus unleashing the upcoming Sunni Tsunami.

Do you really think the world is oblivious to the fact that America, which has staked the turf of global moral clarity, has become, under Barack Obama, a full partner with terrorists and is willing to differentiate between terrors just to defend and protect a mass murderer? Obama’s realism needs to start dealing with reality.

The same article about the Jewish French girl speaks of 16% of French citizens supporting ISIL. When the Institut national d’études démographiques (INED), the French equivalent of the US Census Bureau, makes the claim that 4,155 million French are Muslims (About 6.3% of the population) of whom only 36% are hardcore devout Muslims, then I assure you a Tsunami is coming when the seismometer reading is 16%.

How did we get from approximately 2.3% (.36 *.063) of the French population that normally would have supported ISIL to 16% of France’s population? True that some included in this survey may just be dimwit anti-Semitic or dimwit plain ignorant. That number, however, cannot possibly be 9.1 million French (13.7% of 66.259 million French).

There is more at play here when a Jewish French girl, living in the most secular country on the planet, joins ISIL. Below the veil of idealism lurks the effectiveness of the ISIL message that no F-16 or B-1 bombers can defeat. A message resonating so well and so far that even a secular country is feeling its deadly pinch.

I think the guardians of the sensors entrusted with predicting the coming of the Sunni Tsunami are not telling us the whole truth.

Because the French Muslims are able to express themselves, but Arab Muslims cannot, this region will bypass, most likely, the tremors stage to a full-blown Sunni Tsunami. The Syrian Uprising Assad tried to oppress savagely and the indifference of the world community to ethnic cleansing, led by a US president who is unsuitable for the job, have exposed us all to terror we cannot yet fathom nor control.

This may explain why France and Turkey are backing the establishment of a No-Go buffer zone to protect civilians and cushion their participation in battling ISIL. Both, because of history and geography, see the Sunni Tsunami coming and Obama still thinks he knows it all.

When tens of millions of Sunnis, from a universe of 1.2 billion, begin to distill and absorb the information properly, as have the French Sunni population, they will be supporting ISIL as well because it will be seen as the only defender against what has gone terribly wrong in Syria. How else can 1.2 billion people express themselves when they see our president protecting the terror of Khamenei and Assad while they continue killing women and children with impunity?

Do you see how unfit Obama is to manage the complexities of our world? How dangerous he is to America’s security imperatives? Watch out for the Sunni Tsunami coming.