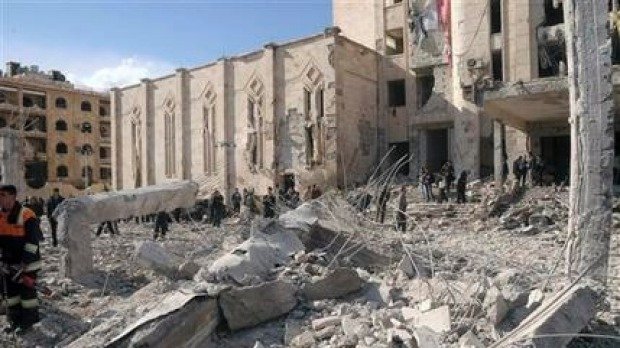 Suicide attacks will win the war for the rebels. Unless the Russians are willing to risk a “surge” of troops, high casualties, and management of Sunni anger, this is a fact as it was for Iran in Iraq when it deployed ISIL against American troops.

Al-Qaida affiliate Al-Nusra Front launched an assault on Friday with a suicide attack against forces loyal to the psychopath Baschar al-Assad in Aleppo province. Fierce clashes, which ensued between regime loyalists and rebels have left more than 70 dead, activists on the ground said.

Fighting raged around the village of Bashkoy, which lies at a crossroads north of Aleppo city.

“Violent clashes followed the suicide attack, between the Syrian army and pro-regime militia on one side, and Islamist fighters on the other,” One of the activists said.

At least 33 pro-regime fighters and 38 opposition fighters were killed, he added. The region basks with an endless number of Sunni fighters while Assad forces have suffer from depletion. The math is easy.

People forget this is a sectarian war, unlike any other, where the gods, the faith, the history, and all the past sacrifices are bundled in one angry war machine intent on winning at all costs.

The toll included both Syrian and foreign fighters, who have become increasingly common among jihadist groups in the country, where more than 300,000 people have died in the nearly five-year-old war.

Suicide attacks will win the war for the rebels. Once the U.S. and Russia realize this fact, it would be too late. Happy you want Assad to remain in power?

There was also fierce fighting in nearby Khan Tuman, a former rebel stronghold which government forces captured on December 20.

Al-Nusra and allied rebels seized several neighbourhoods in Bashkoy and clashes subsided overnight, according to the Observatory.

Eastern parts of Aleppo province are held by the Islamic State jihadist group, and the west is held by opposition groups ranging from U.S.-backed rebels to Al-Nusra.

Regime troops have been fighting to retake southern parts of the province.

Aleppo city, too, is divided. Rebel groups control the eastern parts of the city while the west is held by regime troops.