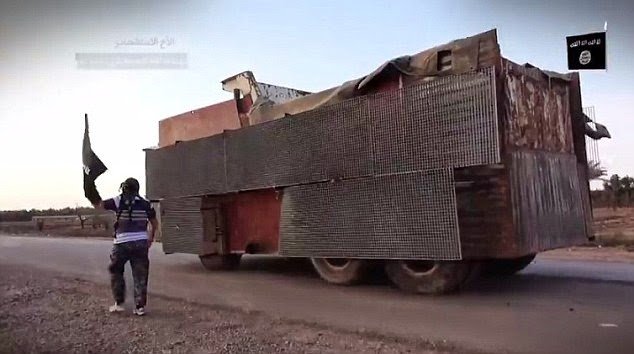 During WWII, the Japanese Kamikaze lost to a much determined America, backed by its own citizens, to win the war. In Afghanistan and Iraq, America lost to suicide bombers backed by more determined Iran and Syria. Today, Assad is losing to suicide attacks payback by a more determined hodgepodge group of extremists.

In a way, the methods matter, but based on this historical perspective, motivation trumps methods any time. The Islamists fighting Assad are far more motivated than the forced recruits and the mercenaries of Hezbollah Assad is relying upon to protect his regime.

This should be a wake-up call to every western leader, Putin, and Khamenei. Backing the Assad family is a losing proposition and unless his backers cut their losses quickly, they and the U.S., under this administration, may have no say in what happens in the region anymore. The Islamic State and the extremists Assad created with his terror are no longer toddlers crawling or the junior varsity team Obama so expertly labeled. They have discovered ways to win against some of the best trained fighters Iran has produced.

This Monday morning, two suicide trucks by the Nusra Front overwhelmed an army base full of weapons the Assad forces occupied. These suicide attacks payback should be a reminder to Assad and Iran that what goes around also comes around. Assad has become the victim of his own methods he and the Iranian regime deployed in Iraq and which cost over 4,000 American lives. Al-Qaeda may have attacked the US directly at home, but let us not forget that the Mullahs in Iran and the Assad regime attacked us indirectly in the Middle East with greater loss of lives than 9/11.

The endless supply of Sunni recruits willing to fight the Alawite and the Shia ‘infidels’ backing the Assad regime has manifested its ugly head because Assad chose to feed the ethnic flames. To bury it, Assad and Iran must be defeated and time must heal the sectarianism Assad has let loose so recklessly by targeting Sunni women and children with his Sarin and Chlorine Gas, as well as deadly barrel bombs.

The Iranian people must find a way to dislodge the extremists from their own government spreading sectarian hate and ethnic divide. No Syrian wishes upon the Iranian people any harm, the same way Iranians wish no harm upon the Syrian people. Only the extremists on both sides are responsible for the mayhem, the suicide attacks payback, and the empowerment of more fanatics in Syria.

As long as Putin stands by Assad, the Sunnis extremists will only grow bolder and deadlier with their suicide attacks payback. Putin is too blind to see what awaits his navy in Tartous if he does not nip Assad in the bud. World powers must find an alternative to Assad the way they found an alternative to al-Maliki in Iraq. The longer Assad stays, the stronger the legs of ISIS, al-Qaeda, and the Nusra Front to carry them further than any of us can imagine.