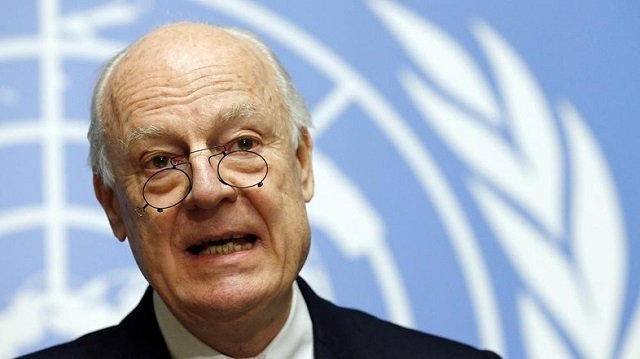 Submitting the Syrian People to Assad the Butcher

January 25, 2016 4:40 pm 0
Ahmadinajead Visiting Lebanon, His Occupied Territories
This Is Not the Syria We Are Fighting For
Chemical Weapons Conundrum

Submitting the Syrian people to Assad the butcher will start Friday. Under the auspices of what is dubbed peace talks between the warring parties in Syria. Behind this effort are Barack Obama, John Kerry, Vladimir Putin, Ali Khamenei, and the United Nations represented by Staffan De Mistura.

De Mistura told reporters that the start date was pushed back because of a “stalemate” over the makeup of the delegations, but that the invitations to the participants were expected to be sent out on Tuesday. One of the invitees is an Assad agent named Haytham Manaa’ Assad insisted on his presence, so did Russia and finally John Kerry. Why? Because he was tasked to split the Syrian opposition apart if matters do not go the Assad way.

“We are going to aim at proximity talks starting on the 29th and ongoing for six months” De Mistura said, adding that the first round was expected to last between two to three weeks.

“There will be no opening ceremony,” the U.N. envoy said.

Securing a ceasefire and space to deliver humanitarian aid to suffering Syrians will be among the first priorities, he added.

“We are all feeling… the time has come to at least try hard to at least produce an outcome,” De Mistura told reporters. Any outcome that is, including submitting the Syrian people to Assad the butcher.

The talks will mark the first time the warring sides will take part in negotiations since January 2014, when de Mistura’s predecessor Lakhdar Brahimi hosted high-level but fruitless meetings in the Swiss cities of Montreux and Geneva, a round of talks known as Geneva II.

We expect these rounds of talks to be as fruitless because the Syrian people will never submit to Assad again. Dream on Putin while your economy suffers $30 barrel of oil.

Submitting the Syrian People to Assad the Butcher