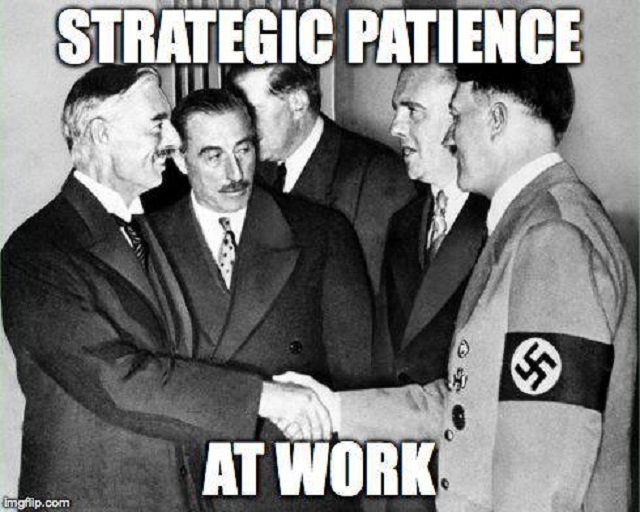 Do you know the story of the teacher asking his pupil how he likes to do his homework, and the pupil saying I would rather do nothing? This laziness is on full display at the White House with Obama’s Strategic Patience nonsense he touted as the answer to all the problems flaring around the globe threatening either U.S. allies or U.S. interests.

Now that Putin is killing CIA-backed Syrian rebels defending their homeland from the Assad/Iran/Russian occupation, how is that Strategic Patience nonsense working for you Mr. President? Not one word from the White House about defending their own assets. Wonder why.

The battle for Aleppo, the second largest city in Syria is underway. One one side the Assad forces backed by Hezbollah and Iranian IRGC terrorists are fighting the moderate rebels, and on the other side, the ISIS terrorists are also battling the moderate forces the U.S. would need to rely upon for Syria to have any chance of emerging from this devastating civil war with any signs of political and social normalcy.

Incidentally, if you think there are no moderates in Syria, you are a victim of the Assad/Khamenei propaganda. They have you where they want you. If not Assad, it is ISIS.

Yet, Barack Obama sits on the sideline hoping his Strategic Patience pays off. Doing nothing, for the lazy Obama, has become the motto of his own legacy. If Aleppo falls to the Assad forces, there will be another one million Syrian refugees heading towards Europe, yet Barack Obama is as silent as a lamb. How is that Strategic Patience nonsense working for you Mr. President?

In the con movie The Sting, there is a line in which FBI Agent Polk, played by actor Dana Elcar, greets someone by saying: “Sit down and shut up, will ya? Try not to live up to all my expectations.” Obama’s Strategic Patience nonsense exemplifies this line. He is telling the American people to sit down and shut up, and to try not to live to his expectations of lapping his BS words like a kitten. How is that Strategic Patience nonsense working for you Mr. President?

U.S. interests in the Middle East are in ruin and our allies are turning to our enemies for comfort and security. In the meanwhile, and while all the reasons our president cited for signing the Iran Deal come crashing down (spun as better expected Iranian behavior), it seems Iran is getting everything from Barack Obama, and America is earning Tehran’s insults and fighting men to kill the people we need the most to save Syria from the clutches of extremism.

We urge you to watch the video below of Secretary George Schultz explaining how President Ronald Reagan was able to negotiate with the Soviet Union the issue of human rights as a legitimate agenda item the U.S. can use to pressure the Soviets into respecting their own people. Compare that triumph of American diplomacy to Obama’s neglect of securing not only a better life for the helpless Iranian people, but also for four Americans languishing in Iranian jails. To say how shameful the Obama presidency has been would be quite an understatement.