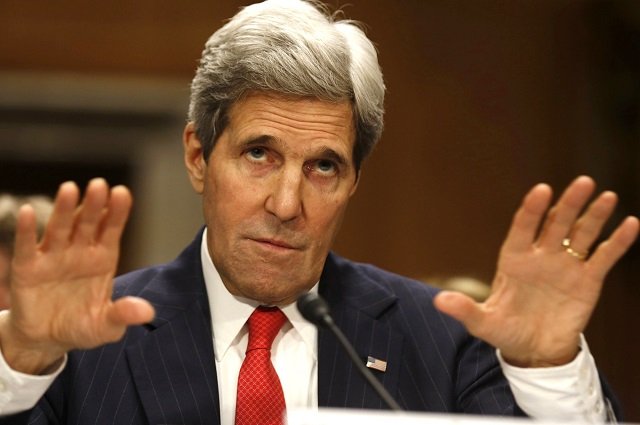 An American secretary of state was once awarded a Nobel Peace Prize for outlawing war. In describing how 62 countries came to sign (and 85 U.S. senators to ratify) the 1928 Kellogg-Briand Pact, the Scottish historian D.W. Brogan observed: “The United States, which had abolished the evils of drink by the Eighteenth Amendment, invited the world to abolish war by taking the pledge. The world, not quite daring to believe or doubt, obeyed.”

Mr. Kerry announced last week that he’d like to see Iran participate “from the sidelines” in the talks, scheduled to begin in Geneva later this month, to end the Syrian civil war. He’s working overtime on a “framework” agreement for Israeli-Palestinian peace. And then there’s the nuclear deal to finalize with Iran.

Geneva II, as the Syrian talks are known in diplospeak, is based on a June 2012 international communiqué calling on the Syrian government and the opposition to come together and form a “transitional” government. When the communiqué was issued, then-Secretary of State Hillary Clinton insisted that its terms barred Bashar Assad from remaining in power, while Sergei Lavrov, her Russian counterpart, insisted the contrary.

In theory, the meeting will bring together all the relevant parties to negotiate a political solution to the war. In reality, Assad is barrel-bombing civilians, the opposition is at war with itself, and the Syrian National Council, the main (and moderate) opposition group, has insisted that it will not take part in a sham process.

So what is Geneva II supposed to achieve? It won’t end the war in Syria. Iran has already announced that Mr. Kerry’s “from the sidelines” suggestion is incompatible with its sovereign dignity. If members of the Syrian opposition show up while others refuse, it will further fracture the side the U.S. is supposed to be on. If the U.S. agrees to give Iran a seat at the table (as Mr. Kerry will be tempted to do), the move will further strengthen Assad’s hand.

Otherwise, the prospects are excellent.

The secretary of state has also been busy with Israeli-Palestinian peace. On Sunday, on his 10th peacemaking trip in a year, he spent hours discussing the subject with Saudi Arabia’s 89-year-old King Abdullah, who offered his “enthusiastic support.” When you’ve alienated the Saudis by capitulating on Iran and Syria, there’s at least a logic in trying to appease them with a renewed push for Palestinian statehood.

But here too it’s hard to avoid the unreality of Mr. Kerry’s undertakings. The Palestinian Authority has had two masters since Hamas took control of Gaza in 2007. Who, then, speaks for the Palestinians? Mahmoud Abbas, 78, nominally the Palestinian president, no longer bothers with elections. There hasn’t been a prime minister of Palestine since June. Israel demands that Palestinians recognize it as a Jewish state. Mr. Abbas explicitly rejects it as one. Mr. Kerry is also exploring the possibility of interim agreements. Chief Palestinian negotiator Saeb Erekat insisted on Saturday that “there’s no place to talk about interim agreements.”

And there was this: The Israeli cabinet was presented Sunday with a long report on Palestinian incitement since the resumption of peace negotiations. “Official Palestinian media outlets relay that Israel has no right to exist, and that the Jewish people have no claim to the Holy Land,” reported the Israeli newspaper Haaretz. “In addition, other messages prevalent in Palestinian media include that Israel’s disappearance is inevitable and expected to happen soon, as Jews are sub-human creatures that must be dealt with accordingly.”

Otherwise, the karma is excellent.

And then there are the nuclear talks with Iran. In case you missed the fine print, the interim deal that supposedly brought Iran’s enrichment to a halt has yet to be implemented. On Monday, Reuters reported that Iran expected to start honoring the deal by the end of the month. Maybe. From the beginning of the Iranian nuclear drama in 2002, Tehran’s M.O. has been to stall for all the time it can get. Expect the six-month deadline that Mr. Kerry promised in November to drag into a year.

Meanwhile, the head of Iran’s nuclear program recently said Iran had “two types of second-generation centrifuges,” capable of enriching uranium at much faster rates, but that it is keeping them offline—for now. Think of them as Chekhov’s gun.

Otherwise, the diplomacy is proceeding as planned.

For all this, Mr. Kerry could succeed in his efforts, just as Frank Kellogg did: When the diplomacy of great powers becomes unstuck from reality, sometimes it’s easier for the smaller powers to go along with the fiction now and take advantage of the facts later. But the world won’t live in illusions forever. Too bad the same probably can’t be said for John Kerry.