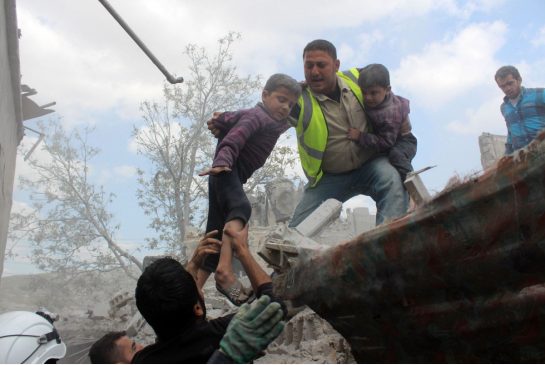 They have been described as “silent death.”

And a recent report suggests that Syrian government forces dropped them repeatedly in the northern governorate of Idlib between March 16-31, affecting at least 206 people.

“Chlorine barrels are silent death. You can see the people dying in front of you, but you can’t do anything,” Majd, an emergency first-responder and media liaison officer for the Syrian Civil Defence in Idlib, told the Star.

Though it could not absolutely confirm the use of chemical weapons, HRW said the evidence “strongly indicated a chemical attack.” One such bombing killed six civilians, including three children, the group reported.

About 720 Syrian volunteers — known as the White Helmets — work with Civil Defence teams in the Idlib area, said Majd, who didn’t use his last name for fear of reprisals.

Many of these first-responders witnessed the immediate aftermath of the alleged chemical weapons attacks.

But what exactly is a chlorine-filled barrel bomb, what danger does it pose, and what happens when this type of weapon hits a civilian area?

What types of chemical weapons were allegedly used by the Syrian government in March?

Human Rights Watch said it was impossible to conclusively know what chemicals were used in the attacks in Idlib governorate.

Doctors and rescue workers, however, said they smelled chlorine at bomb sites and on the clothes of victims, while a journalist reported seeing a refrigerant canister emitting a yellow gas after an attack in Idlib city.

In three attacks, HRW reported that “people near the impact sites exhibited symptoms consistent with exposure to toxic chemicals, and gas canisters were among the barrel bomb remnants at the impact sites.”

What symptoms did the victims exhibit?

Mohamed Ghaleb Tirani, the director of the field hospital in Sarmin, the site of three attacks, treated members of the Talib family, who were killed in one of the bombings.

“The children were foaming at the mouth, they were suffocating, then their hearts stopped. The parents had trouble breathing. We tried to treat them, but they died as well,” he said.

Yazan, a local Syrian activist, described “a very strong chlorine smell” at a bomb impact site near Qmenas, a village six kilometres from Idlib. “One of our team members passed out due to the smell. It was horrible. My eyes were burning, I wanted to throw up. My skin felt like I had rashes.”

How common is the use of chemical weapons by Syrian government forces?

In August 2013, hundreds of people were killed after government forces allegedly dropped sarin — a weapons-grade nerve gas — on a Damascus suburb.

The regime was accused in mid-April 2014 of sending government helicopters to drop chlorine-filled bombs in northern Syria.

In September last year, the Organisation for the Prohibition of Chemical Weapons found “compelling confirmation” that chlorine (either pure or in a mixture) was used “systematically and repeatedly” as a weapon in northern Syria.

Are Syrians equipped to respond to chemical weapons attacks?

“The civil defence is not entirely equipped to deal with such cases,” said Majd. “All we have are gas masks and filters, but we don’t have the right clothes, or tents to wash people and isolate injuries.”

In Idlib city last month, Majd said the civil defense workers established a makeshift decontamination tent to “bring people in, wash them with water and soap, and get them out,” while people with more severe injuries were taken to hospital.

In Sarmin, 20 civil defence workers were injured after being exposed to what is believed to be chlorine while they tried to rescue members of the Talib family.

Speaking to HRW, Fares, a member of the civil defence crew that responded to the attack, said the family was trapped in the basement when they arrived seven minutes after the bomb hit.

“We had no protective equipment . . . I felt short of breath, coughed and became dizzy. I couldn’t even take two breaths. I could not bear more than 40 seconds downstairs,” Fares said.

“At the end of the day, both are weapons that kill people,” Majd said.

“As civil defenders, we are fully equipped to deal with the explosions of the regular barrel bombs. But chlorine barrels are silent death. You can see the people dying in front of you, but you can’t do anything.

“We have seen some kids that we were able to recover from the rubble alive, but because of the chlorine gas, they died afterwards. That wouldn’t happen with a regular barrel bomb. This is the difference.”

How are people impacted psychologically by chemical weapons?

“When a barrel bomb is dropped, you know it’s landing either on you or your neighbour. You wait for the bombs to be dropped, and it takes accuracy or bad luck for it to be dropped on you.

“When it’s a chemical weapon, there is no one here to deal with it, and the scale is much worse. You don’t have to be unlucky, and the weapon doesn’t have to be very accurate, for you to get injured.”

How can people protect themselves during these types of attacks?

“When an area is being bombed by the regime, people go to their basements for protection,” Majd said. “But at any time, anyone can tell you, ‘It’s chlorine,’ and when it’s chlorine you have to go to the higher floors.”

He told the Star people feared the regime would use chemical weapons more frequently in northern Syria, since the area is no longer under government control.

“Whenever an area comes out of the regime’s control, the regime starts bombing that area with chemical gases or any sort of weapon. We are afraid of large-scale chemical attacks in the north,” he said.

World yawns as Syria enters the dark ages
Syrian regime using chemical weapons in battle for Homs
Why Would Russia Agree to Investigate Assad’s Use of Chemical Weapons?
Assad Genocide 429