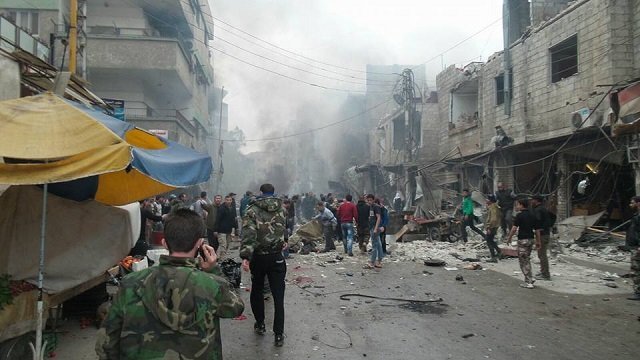 At least 62 people were killed Sunday in a series of attacks, including a car bombing, near a Shiite shrine south of Syria’s capital, state television and a monitor said. Shrine of Sayyeda Zainab Area Hit by Suicide Bombs

The Syrian state broadcaster said a car bombing and two suicide attacks ripped through the area of the Sayyida Zeinab shrine, killing 30 and wounding dozens.

“The attacks came as pupils were leaving school, and several of them were killed,” the state broadcaster reported.

Activists on the ground who monitor the war gave a slightly higher death toll of 31 originally then later it adjusted to 62. The activists claimed there were four distinct attacks.

Meanwhile Reuters also confirmed the death toll to reach at least 62 people. It provided no number of injuries, but one is safe to assume that double the casualties number in injuries may have occurred. The dsitrict is mostly inhabited by Syrian Shiites who support both the Assad and the Iranian regimes.

“There was a car bomb and two suicide bombers who blew themselves up. We don’t know the cause of the fourth explosion,” the Britain-based Observatory said.

At the end of January, the Islamic State group said it was behind bombings near the shrine that killed 71 people, among them five children.

The Sayyida Zeinab shrine contains the grave of a granddaughter of the Prophet Mohammed and is particularly revered as a pilgrimage site by Shiite Muslims.