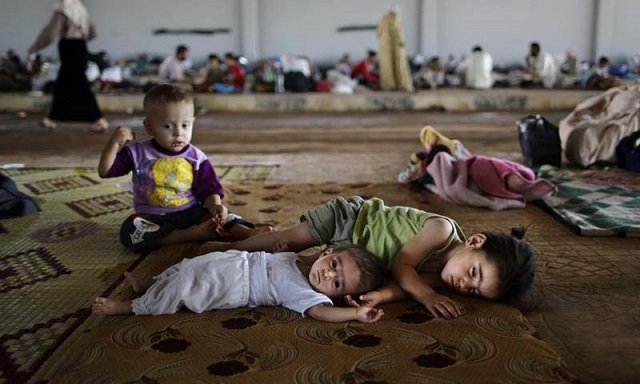 As the psychopath Assad and the criminal Nasrallah lay siege to Madaya, a small town located 25 kilometers from Damascus, thus causing starvation and disease in order to ethnically cleanse it from all Sunnis, the question then becomes, should Saudi Arabia ethnically cleanse its Eastern Province of all Shias in response to the Iranian crimes being perpetrated in Syria?

Assad, with help from Hezbollah and Iran, have been ethnically cleansing Syria from all Sunnis for over three years. Most of the towns connecting Damascus to the Mediterranean coast, to include all the towns near the Lebanese borders such as Qusayr and Homs, have been subjected to extreme starvation in order to force migration of their Sunni inhabitants.

Why should Saudi Arabia, Bahrain, and Kuwait not follow suit by forcing their Shiite population, or at least the troublesome ones, to settle in some African country? If Iran is implementing this illegal policy in Syria under the watchful eyes of the United Nations, why should not the Gulf countries implement a similar policy to save themselves from Iranian terror?

Instead of hanging Shiite clerics who trained in Iran in the art of spreading violence, the kingdom can simply throw them out to save itself the trouble of dealing with Iranian destabilizing tactics.

These are hard questions the Gulf countries may have to answer sooner or later.

What Iran and Hezbollah are doing in Syria gives the Gulf countries every right to respond in kind. Since international law and the United Nations are ignoring the Iranian ethnic cleansing of Syria, who will dare question the Saudi response?

As far as Barack Obama is concerned, unless the two words “ethnic cleansing” become part of the golf lexicon, don’t expect this coward president to utter them ever or call on Iran to stop its illegal behavior. His job is to either ignore terror until it’s too late (i.e. ISIS) or to empower terror by legitimizing its sponsors (i.e. Iran Deal).

So far, up to 4 million Sunnis have become forced refugees living under terrible conditions in Turkey, Lebanon, and Jordan. Another 8 million have been displaced internally because of the Assad ethnic cleansing tactics backed by Hezbollah and Iran. This represents half the population of Syria.

If the Gulf countries decide to force the migration of their Shiite population, the total does not exceed 3 million.

If Iran continues destabilizing the Gulf countries by creating terror cells — one such cell was uncovered in Bahrain two days ago — then Saudi Arabia should seriously consider this dramatic step as a counter response to the Mullahs of Iran ethnically cleansing the Sunnis of Syria.

Let the Mullahs taste their own medicine.