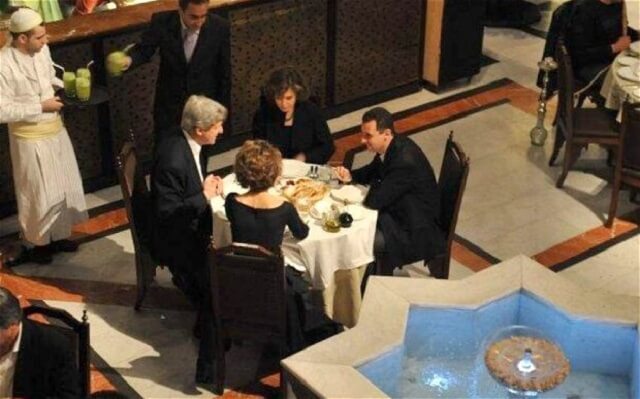 Fools are those who believe Secretary of State John Kerry is out to remove the psychopath Baschar al-Assad from power. What Kerry says publicly about Assad is not reflective of the long and intimate relationships John Kerry has had with the Assad family dating back to his father when he ruled Syria.

The Blaze wrote a long article on this subject many should read to understand how deep their friendship is.

Kerry is not new to controversies. At a time when the U.S was battling Communism in Asia, Kerry was being steered by our Communist enemies. In similar fashion, John Kerry is letting himself get steered by Baschar al-Assad partially due to his deep friendship with the butcher of Syria, and partially because Kerry is a weak man disposed to easy manipulations and deceit.

Seeing that Assad remains in trouble despite the fresh new Russian support he received and which John Kerry never objected to, his latest moves to save Assad is to invite Iran to join the peace talks in Vienna this week in the hope the Iranians can weigh-in on the Saudis to agree to Assad remaining in power in return for some political concession in Yemen or elsewhere. Kerry hopes for some kind of a Saudi-Iranian barter to help him with his task. Saving Assad is John Kerry’s top priority.

For Kerry, Assad represents the “resistance” he, during his youth, manifested against the U.S. Government during his time at the Vietnam Veterans Against the War. Assad “resistance” captures the emotional and ideological essence of Kerry’s own political activism. Besides the deep friendship John Kerry has for the Assad family, the nostalgia Assad’s resistance stirs in Kerry puts him at odds with his official mission as Secretary of State. This is why the public display of enmity towards Assad confuses those who cannot manage to audit his actions with regard to his public talk.

For Kerry, Assad is the son he never had. And it would not surprise us at all if John Kerry has far more intimate and secret relationships with the Assad family such as playing the role of the godfather of Assad’s children. This is how deep their friendship is.

Saving Assad is John Kerry’s top priority. Anyone who believes John Kerry wants to see Assad deposed or removed from power does not understand the long history between the Kerrys and the Assads that goes back to the days of Hafez al-Assad.

In one Commentary Magazine article, the author describes this relationship succinctly with this paragraph:

Staffers describe their collective cringe when, after a motorcycle ride with Bashar al-Assad, he returned to Washington referring to Bashar as “my dear friend.” Bashar may be a lot of things, but “my dear friend”—an address Kerry used only with a select few, such as the late Ted Kennedy—should not have been one.

To Kerry, Assad is equivalent to Ted Kennedy in terms of the scale of friendship he harbors for the butcher of Damascus. Saving Assad is John Kerry’s top priority even though you will never hear him say, publicly, anything but the opposite.

By inviting Iran, Kerry hopes the terrorists in Tehran would have a trick up their sleeves that would convince the Saudis to accept Assad when Russia failed.