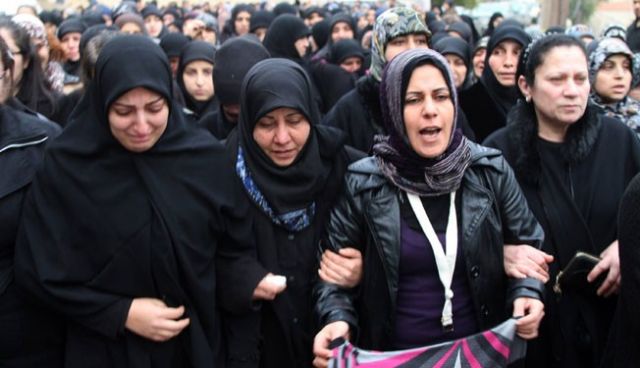 As Iran recruits foreign fighters to back the Assad regime, the war in Syria has reached a point when stifling recruitment becomes a military strategy to be deployed with astuteness and cunning.

Here is why Hezbollah is primed to be confronted by such a strategy. Removing Hezbollah fighters from the equation will accelerate the demise of the Assad regime.

Unlike many other Arab countries, the Lebanese people still enjoy a certain freedom of expression to include the right to demonstrate freely. How to take advantage of this blessing is a question strategic Saudi thinkers must begin to address.

There are two messages to concentrate upon to ruffle Lebanese Shia mothers to go in the streets of Beirut to demonstrate against Hezbollah sending their sons to die needlessly.

The Doubt: Create doubt as to Nasrallah’s message that if Syria falls, so will the Shia of Lebanon. Intelligent people would not lap such nonsense forever.

The Alternative: Create an alternative message that after Assad, peace will prevail and Saudi Arabia would not permit the country to fall apart, nor for the Islamists, like ISIS, to threaten the Lebanese people (Saudi Arabia funding the Lebanese army for that purpose).

When it comes to stabilizing Lebanon, Saudi Arabia has an impeccable record. The kingdom should use it to its advantage in a campaign against Hezbollah.

– To ruffle Lebanese Shia mothers, apply specific media techniques to shed doubts about Hezbollah’s message. Professionals know what we are talking about without getting into the details.

– To ruffle Lebanese Shia mothers, reinforce the message that only death is the result of Hezbollah’s sons going off to war in Syria. The alternative is NOT death but peace for all.

– Create conferences to discuss Hezbollah’s war in Syria. Promote heavily on TV stations and in the social media.

– Highlight Lebanon’s successes after the end of its civil war and how Saudi Arabia helped bring stability and peace.

If the Hezbollah body bags keep coming home, a Saudi focused campaign will bring Shia mothers into the street to protest against Hezbollah’s policies. This is how Saudi Arabia can ruffle Lebanese Shia mothers to become promoters of peace rather than submit to Nasrallah’s message of war.

Alawite Syrian mothers are already hiding their sons or sending them abroad to dodge the draft; it is time to ruffle Lebanese Shia mothers to follow suit in order to block Iran from using Syria as a base to influence the Levant.

Saudi Arabia, with help from Qatar as well, can cut short the war in Syria if it succeeds in sidelining Hezbollah.

Very few people in Saudi Arabia can successfully deploy a large-scale campaign to ruffle Lebanese Shia mothers. Prince Bandar bin Sultan is one of the few we know able to bring Shia mothers into the streets to protest against Hezbollah.