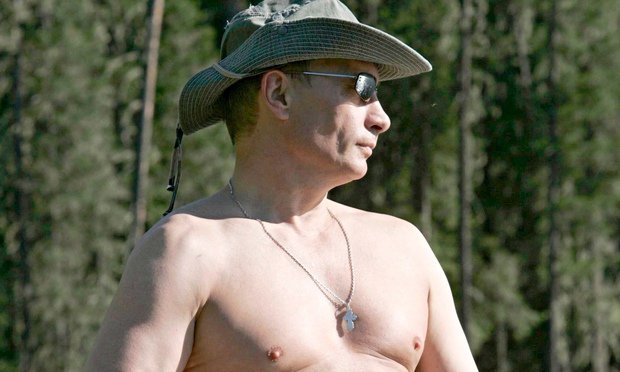 From up close and personal, it seems Saudi Arabia stripped Assad and Putin naked when it succeeded in aligning a majority moderate opposition to Assad in Riyadh last week with one purpose: Show the world that neither Putin, nor Assad are serious about negotiating an end to Syria’s civil war.

The majority of the names of those who have been entrusted to negotiate with the Syrian Government are real oppositionists and real moderates. Out of 36 names, TFS managed to identify only two Muslim Brotherhood members. Those moderates leading the charge are the real threat to the psychopath Baschar al-Assad, and this is why Assad announced his refusal to negotiate.

The last this psychopath wants is to legitimize the moderates in the Syrian opposition who represent a colossal danger to his regime.

After Assad’s announcement, Putin followed suit with his own government riling against the Saudi effort. The foreign ministry in Moscow, which supports Assad, said in a statement:

“We cannot agree with an attempt made by the group that gathered in Riyadh to monopolize the right to speak on behalf of the entire Syrian opposition.”

By ‘entire Syrian opposition’, Russia is referring to the fake Syrian opposition the psychopath Assad has forged and funded, and which is led by the likes of Haytham Manaa, Nizar Nayouf, or Nabil Fayyad. Yes, Assad has his own ready-to-spring opposition shelved for this purpose. They are Assad agents and spies posing as opposition with fake imprisonment sentences and fake tortures.

This opposition Russia is calling for to participate would negotiate for Assad to remain in power, not for what is best for the people of Syria and Syria’s neighbors.

With this meeting in Riyadh that Iran objected to vehemently, Saudi Arabia stripped Assad and Putin naked. Neither wants to see the moderates take center stage in their fight against Assad. Both would rather deceive the world into believing that Assad alternative is ISIS.

This was a master stroke by Saudi Arabia because it has illustrated the futile efforts of the U.N. in its attempts at finding a sensible political solution. It also highlighted the weakness and timidity of Secretary John Kerry as he pursues a diplomatic solution with savages and barbarians who are not interested in his efforts.

Barack Obama never understood that peace comes from a barrel of a gun or the threat of it. In his own world, giving up on the military option to our enemies will yield far better results than the threat of it. And even though Syria has proven him wrong over and over, the man is stuck in his ideological bubble unable to adjust to the realities of power.

Next is more sophisticated weapons, more fighters, and more resources pouring into Syria. It seems this white flag will be raised by a headless Assad.