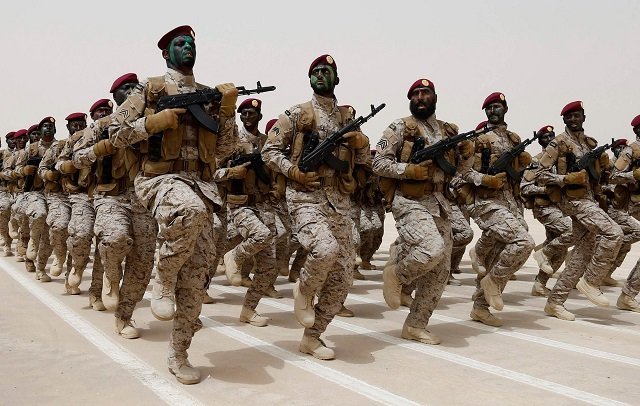 February 13, 2016 8:02 am 0
Saudi Arabia Going on the Offensive Against Iran
Syrian Rebels Get New Missiles From Saudi Arabia
The Many Aces Saudi Arabia Holds Over Iran and Russia

Saudi Arabia’s foreign minister says if the Syrian political process fails, [psychopath]  Bashar al-Assad will have to be removed “by force.”

Saudi Arabia is prepared to contribute ground troops to the fight in Syria, but only as part of a U.S.-led coalition, he said.

“Bashar al-Assad will leave — have no doubt about it. He will either leave by a political process or he will be removed by force.”

“We will push as much as we can to ensure that the political process works. But if it doesn’t work, it will be because of the obstinance of the Syrian regime and that of its allies.”

“And should that prove to be the case, then it becomes clear that there is no option to remove Bashar al-Assad except by force.”

No time for celebrations

The political process has been in doubt, especially of late. U.N.-brokered talks were put on ice almost as soon as they started this month.

Hopes were buoyed here in Munich after U.S. Secretary of State John Kerry and Russian Foreign Minister Sergey Lavrov announced an agreement that would, in theory, lead to a pause of sieges to allow humanitarian aid delivery, and an eventually de-escalation of hostilities.

But U.N. Deputy Secretary-General Jan Eliasson told Amanpour the time for celebration had not yet arrived.

Only after the deal is implemented, Eliasson said, will the U.N. be able to think about restarting peace talks. He emphasized that, though he was hopeful about the deal’s prospects, it was not yet a breakthrough, and he needed to see progress within a week to believe in the deal’s robustness.

Russia’s intervention in the Syrian conflict last fall has bolstered Assad’s position and allowed him to launch a major offensive on the rebel-held city of Aleppo.

Saudi Foreign Minister Jubeir made clear that his country’s troops would not go it alone.

“I can tell you that there is some serious discussion going on with regards to looking at a ground component in Syria, because there has to be a possibility of taking and holding ground, that one cannot do from the air.”

“We are saying we will participate within the U.S.-led coalition, should this coalition decide to send ground troops into Syria, that we are prepared to send special forces with those troops.”

When asked whether America was doing enough to help bring an end to the bloodshed in Syria, Jubeir said they are “playing a role” in the political process, in supporting the opposition, and helping Syria’s neighbors.

Whether that is enough, he said “is for the Americans to decide.”

“From my perspective no country, including Saudi Arabia, can play a big enough role.””

‘Neighbors have to live with each other’

Were Saudi troops to deploy to Syria, they could come into direct contact with the military of Iran — Saudi Arabia’s longtime foe in the region, with whom tensions have been rising of late.

“We have always said that we would like to have good relations with Iran,” Jubeir said.

But Saudi Arabia, he said, has been on the “receiving end” of Iranian aggression.

Iranian Foreign Minister Javad Zarif expressed similar genial sentiments in an interview with Amanpour last month, but did not miss an opportunity to mention that 15 of the 19 hijackers on September 11, 2001, were Saudi citizens.

“We believe that Iran and Saudi Arabia can be two important players who can accommodate each other, who can complement each other in the region,” Zarif said.

“Unfortunately,” Zarif said, “the Saudis have had the illusion that, backed by their Western ally, they could push Iran out of the equation in the region. And they were successful for some time.”

Jubeir reacted to that with mock incredulity.

“I find it comic that the foreign minister of the country that is single-handedly responsible for the mischief in the region for the past 35 years would say this,” he said.

“It is Iran that has mobilized sectarian militias from Iraq, Afghanistan, Pakistan to support this dictator, not Saudi Arabia,” Jubeir said, referring to Assad.