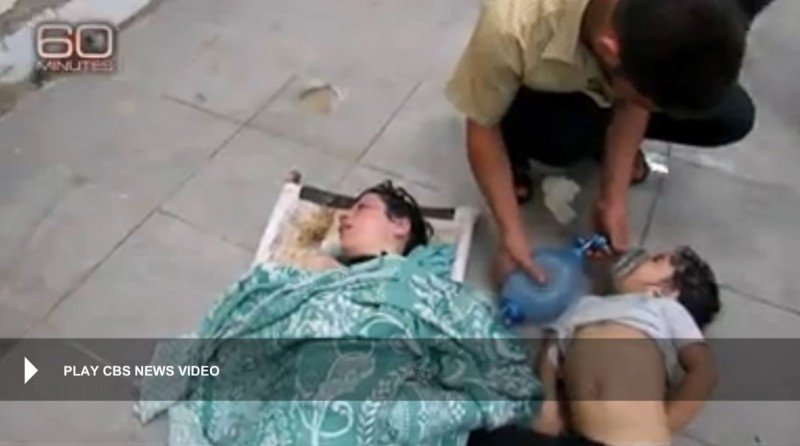 While the US continues striking ISIS positions in Syria and Iraq, the U.S. media has suddenly turned its attention to the atrocities being committed by the Assad regime. One wonders why.

Has the Obama administration finally realized that Sarin, ISIS are connected? Has it realized that the Chlorine Gas the Assad regime continues to use against civilians is feeding ISIS with recruiters and the strong motives to grow and battle?

CBS 60 minutes aired a segment yesterday on the August 2013 Sarin attack that Assad perpetrated against civilians in Moadamiyeh, a suburb of Damascus. The attack, carried out during the night, when colder air could force the Sarin into basements, where women and children were hiding, killed 1,429 people. 426 of whom were children.

In explaining why the program, titled “A Crime Against Humanity“, aired, Scott Pelley, the show host, explained:

” … is necessary viewing for anyone who wants to truly understand the travesty that took the lives of an estimated 1,429 civilians (many of whom where children).”

This administration is still learning on the job seven years into its term. A Syrian child of 10 could have told Ben Rhodes that Assad’s Sarin, ISIS are connected and unless Assad is removed, ISIS will continue to grow and terrorize in response to the Assad terror.

The use of Sarin and other gasses in Iraq during the Saddam Hussein era of terror, and now in Syria during the Assad reign of terror, seem to move people to express deep concerns, but it does not seem to move responsible leaders to take action against the perpetrators of these crimes. In Saddam’s case, he lived another 15 years before he paid for his crimes in Halabja.

Today, instead of Sarin, Assad is using Chlorine Gas, which is killing, as horribly, hundreds of Syrian civilians in different parts of the country. Unlike Saddam who gassed the Iraqi Kurds only one time, Assad is a serial criminal who continues to gas civilians mainly because Barack Obama threatened him with his infamous red line, and then abrogated his responsibilities the last minute to strike the genocidal Assad. Assad perceived Obama’s lack of action as a green light to carve his crimes on every building in every town revolting against his tyranny.

Incidentally, anyone who believes Assad has relinquished the Sarin stock in his possession is a fool. As long as Assad is in power, he will use the deadly gas again whether against Syrians or others. This is what sociopaths do.

Sarin, ISIS are connected and have always been connected. No Sunni living under Assad’s rule would not bear arms to defeat his criminality. Even if that means those bearing arms will have to submit to extremism to see justice done. Assad has been and will always be the reason why terror grows domestically through his actions or regionally through his proxy support. In brief, the Assad family is synonymous with terror. They exist only to perpetuate terror and violence.

Sarin, ISIS are connected, and unless the world community moves swiftly to remove Assad from power with the help of the Alawite communities now largely tipping towards a sensible solution to Syria’s civil war, ISIS will continue to grow and establish itself. There is a point of no return in every revolution, uprising, or violent movement. ISIS has not reached that point because of western action to stem the flow of jihadists. However, if Assad is not removed by force, we may face a permanent state of an Islamic State that many of the 350 million Arab Sunnis would find appealing because of western apathy towards criminals like Assad and his masters in Iran.

For once, we need to make the right decision in Syria to protect U.S. long-term interests.