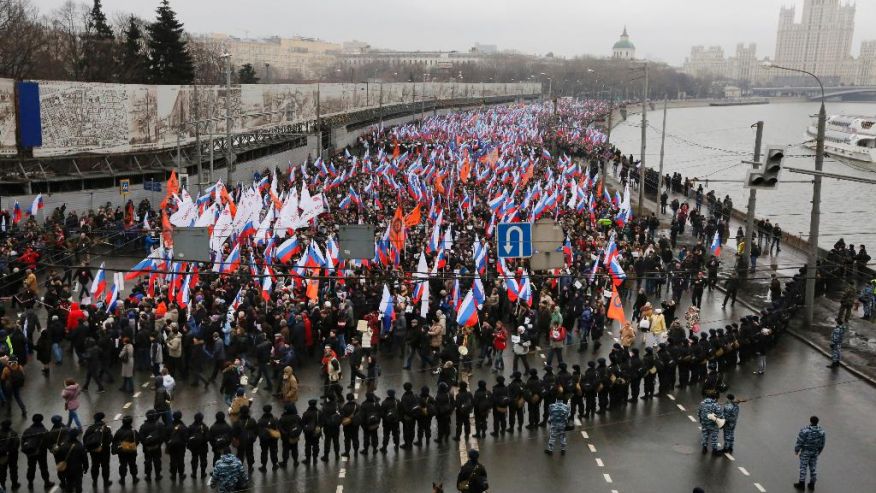 October 17, 2015 9:11 am 0
Did Putin once again outfox Obama?
Obama to Help Putin Seal Syria’s Fate
Putin Is Instigating ISIS to Battle The Moderates

A maximum 300 demonstrators are allowed at the October 17 rally

The Russian opposition political movement ‘Solidarity’ has announced it will hold a rally ‘No War’ on Saturday (October 17) in Moscow against Russia’s involvement in the war in Syria, officials report.

Since 2014, ‘Solidarity’ has been arranging regular pickets against Putin’s policy towards Ukraine. The protest organisers say now ‘thanks’ to Putin’s foreign policy, the theme is expanded.

“The campaign seeks to show our attitude to the current political, economic and military-political situation in the country and the world, as well as to some aspects of Russia’s foreign policy…. The maximum number of participants is 300 people”, the head of the department of regional security and anti-corruption in Moscow Alexei Mayorov said, according to the Interfax news agency.

The ‘Solidarity’ movement was founded in 2008 by well-known public and political figures like Russian opposition leader Boris Nemtsov, who was assassinated near the Kremlin in February 2014, and Ilya Yashin, who posthumously released Nemtsov’s report on Russian intervention in Ukraine. The report is entitled “Putin. War.”

Russia began its air campaign in Syria on September 30, saying it was targeting Islamic State. But many of the strikes hit rival insurgent groups fighting against Syrian and Moscow ally Bashar al-Assad.

In the course of Syria’s four-year civil war, the US has been trying to defeat Islamic State whilst calling for Assad to be removed from power.